BAND OF THE DAY: CATHOLIC ACTION 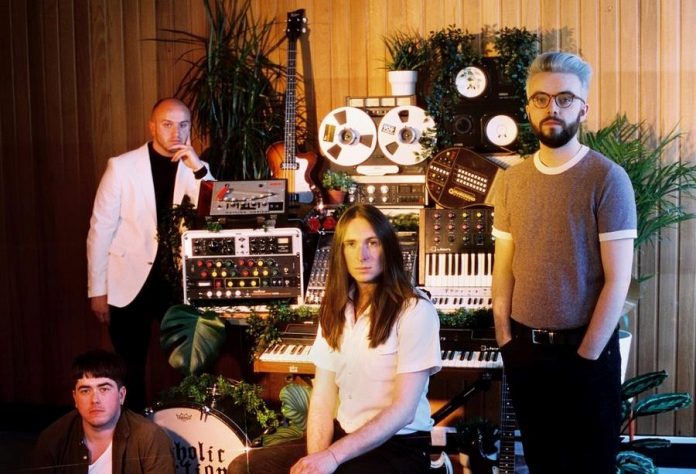 The SAY Award-nominated Glasgow quartet Catholic Action will return with their sophomore album Celebrated by Strangers in March 2020. Lead single One Of Us was given its debut last night on John Kennedy’s X-Posure show on Radio X, marking the first new music from the band in almost two years.

One Of Us packs a fuzzed-out stomp alongside masterfully giddy melodies that sees lead singer and guitarist Chris McCrory recount “the welfare son of a welfare son”, taking aim at the billionaire-owned media and their Bullingdon Club ilk who shirk responsibility for sowing the division we see in the UK.

It sets the tone for a record that asks both searching questions of the self, while pointing the finger at inaction in the wider world. Through a procession of skittish, off-kilter riffs and squawking saxophones, Celebrated by Strangers doesn’t just call for action, it demands it. Fizzing with invention, accusation, self-belief and creativity, it never stutters under the weight of its own message.

The album was produced by lead singer and guitarist Chris McCrory (SPINN, Walt Disco) at Hermitage Works in London and at Shady Lane Studio in Erskine, and mixed by Rich Turvey (Blossoms, Cabbage, The Coral) at Parr Street Studios in Liverpool. McCrory explains further:

One of Us was written as a direct response to what I see happening in the UK – a country ravaged by poverty and a disintegrating social fabric of increasingly isolated and intoxicated people. A neglected group spun in circles by an uncaring billionaire-owned media, (mis)led into pointing the finger at one another as opposed to those truly responsible for this situation. A depressing but common problem in 2019…sound familiar?

This song is a comment on the aggressive divide and conquer politics that has kept this status quo of radical inequality in the UK firmly in place.

I believe people are good hearted at their core but are embittered and led astray by what they’re fed – what they’re seeing, hearing and being told. As long as we stay divided, nothing will ever change. So it’s pretty simple. If people want to shift the status quo they need to organise, come together and fight for equality – a way of life that’s positive, progressive and inclusive. We’re all human (apparently) after all.