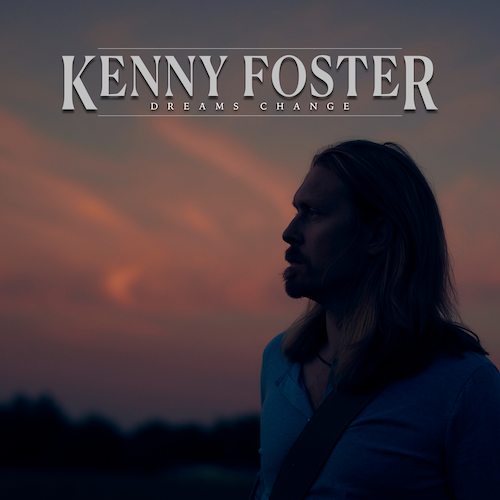 Shared in the midst of his latest trip overseas, the lyrical new single provides another glimpse into the artist’s homespun, thoughtful philosophy, recognising that whatever unexpected challenges life might throw at us, “it all turns out okay,” and finding the right person can be “living proof that God don’t make mistakes.”

“The funny thing about dreams, goals, and aspirations is that when we first make them, we’ve got no Earthly clue what they’re really about or what it will take,” says Kenny. “Sometimes on the way to pursuing one dream we find another that is bigger, better, and brighter than the first. If you find yourself there, by all means, change course. Dreams change, after all.”

The fourth track to be released from the album, this follows ‘Copy, Paste, Repeat‘, ‘Poor Kids‘, and the title track ‘Somewhere In Middle America’, which premiered on BBC Radio 2 earlier this year, with additional airplay including Planet Rock, RTÉ Radio One, BBC Radio Scotland and Soho Radio.

Foster performed at the Birmingham Symphony Hall earlier this week (17/8) as part of Nashville Sounds in the Round, and will make his anticipated return to Scotland this weekend with a main stage performance at Millport Festival (Aug 19-20) alongside Drake White, Sunny Sweeney, Ruthie Collins and more.

On returning to the UK, he said, “It’s been a reunion a long time coming. It feels a bit like returning home, and I’ve dearly missed home.”

The album, Somewhere In Middle America will be available worldwide on all major streaming/download platforms on October 19th, 2022.

ABOUT KENNY FOSTER:
Kenny Foster has shared the stage with artists including Maren Morris, Kacey Musgraves, Brothers Osborne, Old Dominion, Patty Griffin, Buddy Miller, Butch Walker, Lady A and countless others. He was named one of the “Top 10 New Artists You Need to Know” by Rolling Stone and has been featured in the New York Times, Washington Post, USA Today and Forbes. He has appeared in two Super Bowl commercials with Sheryl Crow and Danica Patrick, respectively. Kenny is also honoured to be included in the CMA Foundation “It Starts with M.E.” National Campaign for Music Education and performed as part of the CMA Songwriters Series, alongside songwriting legends Lori McKenna, Marcus Hummon, Lee Thomas Miller and Tenille Townes.

Kenny has performed at the highly-acclaimed C2C Festival in London, and was also invited to perform at the launch of C2C Berlin and at the famed Melkweg venue in Amsterdam as support for Hunter Hayes, as well as recent domestic festival appearances at the ACM Party for a Cause, Americanafest and CMA Fest, among others. Kenny headlined an Armed Forces tour to Asia, performing at bases in Guam, Singapore and Diego Garcia.

Kenny recorded his second full-length record Somewhere In Middle America with GRAMMY-award winners Mitch Dane and Vance Powell at Sputnik Sound, due for release on July 29th, 2022, the long-awaited follow up to 2017’s Deep Cuts. He documented the process of creating this record and the people and places that inspired it by taking his videographer, photographer and producer on a road trip from Nashville to his hometown of Joplin, Missouri, which will result in multi-platform content to be released in conjunction with the forthcoming album.