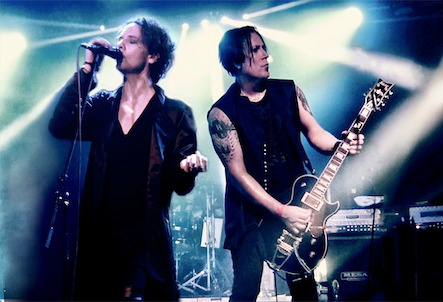 January 20, 2018
Reading time: 4 min.
Facebook
Twitter
Pinterest
WhatsApp
Linkedin
Email
Print
Telegram
Copy URL
By Andy Thorley
Goth-rock duo MGT has partnered today with TeamRock.com to unveil a music video for their brand new song, “Every Little Dream.”
The song is featured on the band’s forthcoming album, Gemini Nyte, that’s due out on February 23rd from Cleopatra Records. The album is now available for pre-order at iTunes.
MGT is the newly cemented collaboration between former The Mission/Peter Murphy guitarist Mark Gemini Thwaite and vocalist Ashton Nyte of The Awakening. The upcoming album Gemini Nyte features 13 new songs written and recorded by Thwaite and Nyte, plus Paul Ferguson (KILLING JOKE) on drums and guest appearances by Burton C Bell (FEAR FACTORY) and Lol Tolhurst & Pearl Thompson – founding members of THE CURE.
““Every Little Dream” is a song I wrote and demoed years before meeting Mark. It was one of those songs that was waiting for the right context before making its way into the world. When Mark and I started working together on the Gemini Nyte album I sent him the demo and he loved it. Mark’s guitars and treatment certainly bring something to the party and the track has become one of our favourites, as well as treat to play live. Hopefully that comes through in the video as well, which was shot during our little European tour last year. Once again Mont Sherar did a wonderful job making us look good!” – Ashton Nyte
“”Every Little Dream” immediately stuck out to me, appealing to my indie rock sensibilities with its hint of The Jesus and Mary Chain and post punk. I reapproached and recorded the guitars in a much heavier punky vibe, also adding some lead guitars and a Steve Jones inspired solo and then asked the mighty Paul Ferguson of Killing Joke to add his powerhouse beats. It’s one of my favourite tracks on the new album.” – Mark Gemini Thwaite
MGT recently debuted Gemini Nyte’s first single “All The Broken Things,” a strident goth rocker with a new video featuring Nyte, Thwaite, Paul Ferguson and ex-The Mission bassist Richard Vernon. Mixed by legendary producer John Fryer (NINE INCH NAILS, HIM, THIS MORTAL COIL) and directed by Vicente Cordero who recently directed videos for QUEENSRŸCHE, 3TEETH and JYRKI 69. Watch it now at https://youtu.be/RBmMg9ulHxg.
The band has also announced a special West Coast album release tour with labelmate Jyrki 69, the frontman for multi-platinum selling Finnish goth n’ rollers The 69 EYES who released his debut solo album on Cleopatra last year. Dates are listed below.
“What happens when the members of The Mission, Peter Murphy, Faster Pussycat & The 69 Eyes meet at the Rainbow Bar & Grill? Put on your sunglasses after dark & come to find out!” – Jyrki 69
“Pleased to confirm our first ever MGT shows in the USA for 2018 following recent shows at WGT Festival in Germany & Camden Rocks Festival in UK with my partner in crime Ashton Nyte of The Awakening. Joining us once again will be my former comrade in The Mission, Mr Richard Vernon on bass, and Fighting Hearts drummer Gary Sullivan completing the lineup.. also looking forward to sharing the stage with Jyrki69 of The 69 Eyes and his band, we are label mates on Cleopatra and both had killer videos directed by Ville Juurikkala last year. Will be a blast to play the new ‘Gemini Nyte’ album live along with some choice cuts from our back catalogues!” – Mark Gemini Thwaite
“Very excited to be touring our new album on US soil in March! “Gemini Nyte” has been a long time coming and I’m looking forward to hearing the songs in a live environment (and played LOUD). Definitely an added bonus to be working with such fabulous bandmates in the MGT live line-up and touring with the lovely Jyrki69.” – Ashton Nyte
MGT Tour Dates (w/Jyrki 69):
Mar 9 – Mesa, AZ – Club Red
Mar 10 – Fullerton, CA – Slide Bar
Mar 11 – San Francisco, CA – DNA Lounge
Mar 13 – Portland, OR – Analog Lounge
Mar 15 – Seattle, WA – Studio Seven
Mar 17 – Salt Lake City, UT – Liquid Joe’s
Mar 18 – Las Vegas, NV – Beauty Bar
Mar 21 – West Hollywood, CA – Whisky A Go Go
For More Information:
https://www.facebook.com/mark.gemini.thwaite/
https://twitter.com/markgthwaite
http://www.mgtofficial.com/
Previous article
REVIEW: MACHINE HEAD – CATHARSIS (2018)
Next article
Between The Buried And Me Face The Gallows