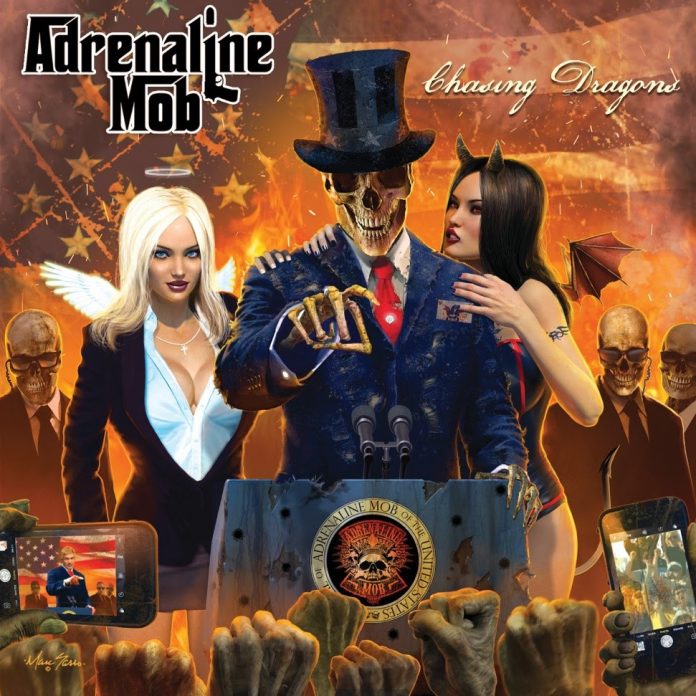 Hard rock icons ADRENALINE MOB have revealed a lyric video for their new single, ‘Chasing Dragons’, taken from their upcoming album, ‘We The People’ which is out on 2nd June 2017 via Century Media Records.

Check out the song here:

Download ‘Chasing Dragons’ instantly when you pre-order their new album via all digital platforms, reserve your copy today at:
http://smarturl.it/AMOB-WeThePeople

ADRENALINE MOB was formed by guitar aficionado Mike Orlando and iconic vocalist Russell Allen (Symphony X, Trans-Siberian Orchestra, Star One, Allen-Lande) in 2012 with support from acclaimed drummer Mike Portnoy (Dream Theater) and bassist John Moyer on their critically-acclaimed debut, “Omertá”. Due to scheduling conflicts, Portnoy departed the band and was replaced by drum legend A.J. Pero (Twisted Sister) for their following releases (“Men of Honor” & “Dearly Departed”) until his untimely death in 2015. Orlando and Allen took a break to process the loss of their friend and band mate while focusing on their respective side projects. The pair reformed in early 2016 for their upcoming release, ‘We The People’, with a new line-up featuring acclaimed bassist Dave Z. (Trans-Siberian Orchestra) and drummer Jordan Cannata.

‘We The People’ was self-recorded, mixed and mastered at Orlando’s Sonic Stomp Studios and features 13 energetic, fist-raising and foot-stomping tracks that put the hard back in hard rock and the heavy back in heavy metal.