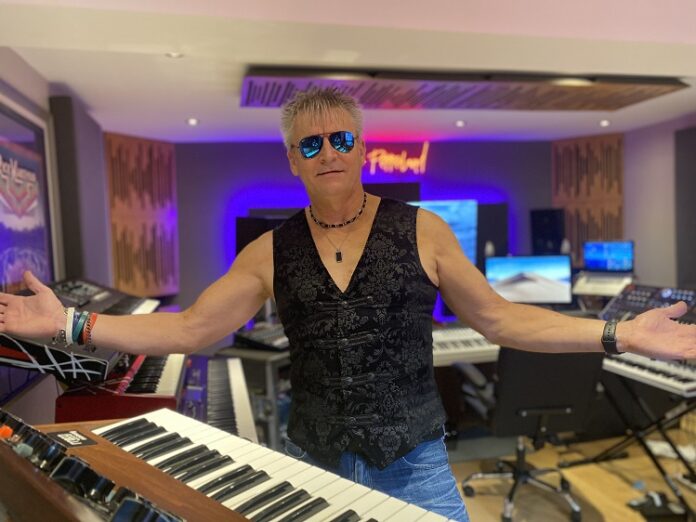 Under the playful moniker of Pepperkid2, FM’s creative keyboard wiz Jem Davis rolls out his melodic and musically diverse solo album, ‘Adventures in Pepperland’, releasing a full-on, visually intense, in-your-face, psychedelic kaleidoscopic video to accompany its strong first single, ‘After the Rain’ — “one of the heavier tracks taken off my new album,” as Jem puts it.

After The Rain Official Video https://youtu.be/qZNTX39KMZI

‘Pepperkid2’ is the guise Jem has adopted for his solo project. The album ‘Adventures in Pepperland’ is due for release on 12th November 2021, with its rock-infused launch single, ‘After the Rain’ released today on 15th October: a track that gives an aptly spicy first taste of the consistently high quality, but wonderfully varied, tracks that you’ll find on its amazingly imaginative peppery parent.

“The album follows no genre restrictions,” says Jem, “so the styles are varied, but all come from the mad world inside my head and from the heart!

“After the Rain’ — the first single to be released from the album — is awash in rock energy, powerful vocals and a storming guitar solo: This time I knew I needed something special so I asked my old friend from UFO/Grand Slam: Mr Laurence Archer if he would do the honours and boy did he!”

Jem also recruited Grand Slam’s Mike Dyer to add vocal power to the track, and also to co-write the album.

“Not being gifted in the vocal department,” Jem admits, ‘I asked my good friend Mike Dyer (Grand Slam) to be the main vocalist/co-writer, and he kindly accepted.”

The video for ‘After the Rain’ (by editing maestro Lee Vernon) wows and nearoverpowers the eyes with striking imagery and filters. Stormclouds and lightning; time-lapse cities, cityscapes and skies — not to mention the musicians themselves — are given ultra-intense, colourful, neon and psychedelic video effects and filters, and reflected and spun like kaleidoscopes.

There’s added poignancy to this song in that Jem dedicates ‘After the Rain’ tothe late, legendary music agent Steve Strange, who passed away in late September at just 53: “Gone too soon!” as Jem says with respect and sorrow.

You’ll certainly get your money’s worth with this album, both from the strength and quality of the individual tracks AND the musical diversity you’ll find in the playlist! Not to mention the great replay value as you’re sure to find favourites you’ll listen to repeatedly.

If you’ve a taste for melodic and creative, high-quality, rock, ‘Adventures in Pepperland’ needs to be on your RADAR. It’s that simple. Take your first step on the adventure with the single ‘After the Rain’.

After The Rain – Now available on all Digital Platforms. https://pepperkid2.hearnow.com

‘Adventures in Pepperland’ is now available for pre-order at www.Pepperkid2.com