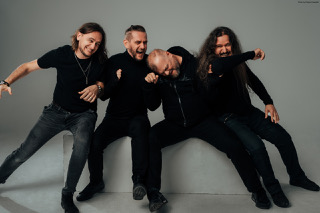 Poland’s RIVERSIDE are pleased to announce a first of three European tours to support their upcoming studio album release “ID.Entity”, to be released via InsideOutMusic on January 20th, 2023. Mariusz Duda from the band comments,

“This week, we’ll give you the first dates of the European “ID.Entity” Tour 2023. In connection with that, we have two important announcements for you:

Firstly, we’ve decided to divide our European tour into three editions, Spring, Summer, and Autumn. The majority of our concerts are planned for the Autumn of 2023 but in the Spring of 2023 we’re going to visit two regions we haven’t been to for a really long time. The Spring tour dates will be announced very soon.

Secondly, and most importantly, given the concept behind the new album, on which we are criticising certain issues, and the fact that some of us are still struggling financially on many levels, we have decided not to sell the more expensive VIP tickets for this tour. Naturally, our fan club members will still be granted the “early entrance” but we will do our best to go out and see you all after each of our shows, which we have been usually trying to do anyway. This will apply to all our concerts promoting the new “ID.Entity” album, which will be out on January 20th.”

Check them out on the following dates:

“ID.Entity”, the group’s 8th studio album was recorded and mixed in two studios – The Boogie Town Studio in Otwock with Paweł Marciniak and in Serakos studio in Warsaw with Magda and Robert Srzedniccy -, mastered by Robert Szydło and produced by RIVERSIDE’s Mariusz Duda himself. The “ID.Entity” artwork was created by Polish artist Jarek Kubicki.

A first single off “ID.Entity” was recently released via the track “I’m Done With You”, which can also be seen here in a video-clip animated and directed by Thomas Hicks / www.thomashicks.co.uk here: https://www.youtube.com/watch?v=3q6XJfKxKb4

It was followed by “Self-Aware” in its ‘Single Edit’ version and with an entertaining video clip directed by Marcin Zawadziński and Mariusz Duda here:
https://youtu.be/Weuo4hgVHyY

RIVERSIDE also launched a “Riverside Heavy” playlist featuring “I’m Done With You” as well as many other heavier tracks from the band’s comprehensive catalogue, which you can check out here:

Here is the standard track-listing for the album:

The album will be available in the following formats:

The pre-order for “ID.Entity” in its various formats is available here:
https://riverside.lnk.to/IDEntity