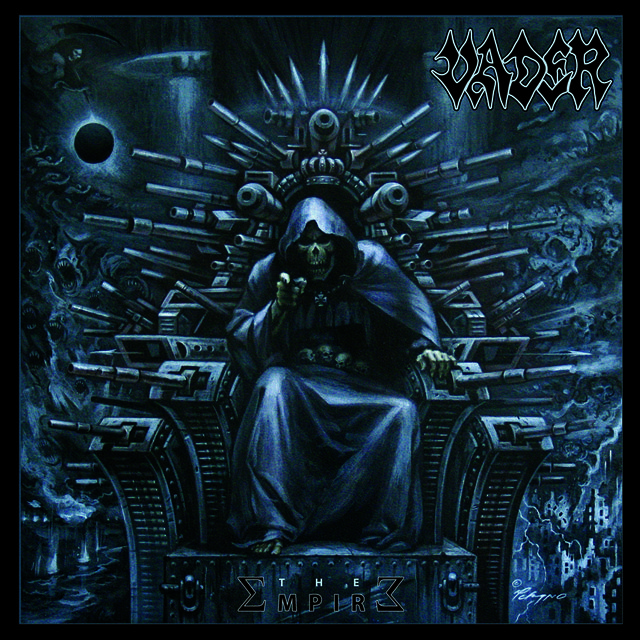 The longest living and most resilient tank of Poland’s Death Metal fleet has once again hoisted its flag – ready to overrun the world with its new triumphant procession. They recently fired their first warning shot with their ‘Iron Times’ EP, and now VADER are building their own all conquering empire with new studio album ‘The Empire’ (out 4th November).

Today, the band release the digital double single ‘Prayer to the God of War’ and ‘Parabellum’as instant grat tracks. Pre-Order ‘The Empire’ now and get both songs directly as a download. Pre-Order digitally via iTunes here: https://itunes.apple.com/gb/album/the-empire/id1152557539

The lyric video of the track ‘Prayer to the God of War’ has been released via YouTube.

The stunning cover artwork of ‘The Empire’ was created by acclaimed artist Joe Petagno who has also created artwork for Pink Floyd, Led Zeppelin, Motörhead, Marduk and Sodom.

Mastermind Piotr ‘Peter’ Wiwczarek states:
“Here is the cover art for ‘The Empire’ created by Joe Petagno himself !!! The whole design includes many details connected to the main theme influencing me before and during the process of recording: war and the “cold crisis” around us today… There are also links to couple of famous movie series, which influence the generations and erupt with violence, hate and “imperial tendencies”… Is this just a fantasy or maybe a sign of the 21st century generation ?  You have to answer that yourself… and the future will show us how real that feeling is. Enjoy ‘The Empire’ and join us on tour soon!”

Without doubt, ‘The Empire’ falls under the category of VADER’s classic albums. The impressive monument that they have built with their 13th studio album will immediately find its place in metal history. And it will also prove that VADER don’t need to make their peace with the world; they never did, and they certainly don’t now – especially after writing more than 30 years’ worth of death metal history.

The globally conquering weapon was produced, mixed and mastered by Wojtek and Slawek Wiesawski. ‘The Empire’ was completed within the secret bunkers of Hertz Studios in Bialystok, Poland. The weapon is going to be unleashed upon the world on November 4th, 2016 by commanders in chief, Nuclear Blast.

VADER will be returning to London this November, as part of their 9 date ‘Rise Of The Empire’European tour. They will be playing London venue, The Dome on 14th November alongside Florida death metal mob Hate Eternal and Canada’s syncopated metal machine Threat Signal.

You can purchase tickets here:
14th November – London, The Dome

Previous article
Listen To The Truth
Next article
Bitchin’ A Ride