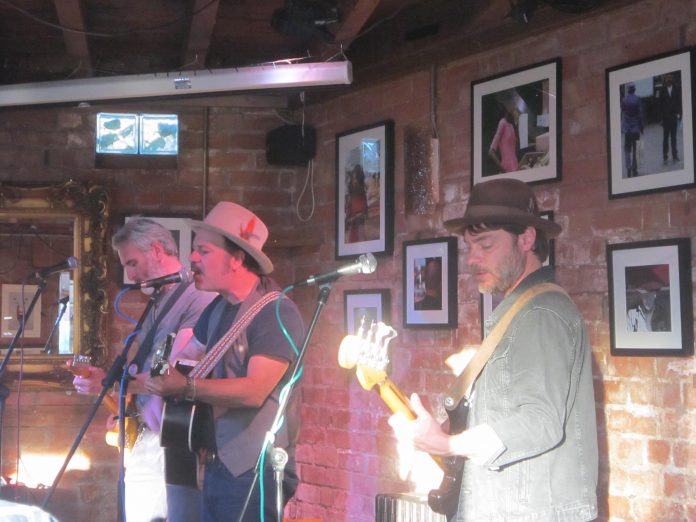 Don Gallardo is American Singer-Songwriter, raised in a small town in Northern California, where he spent years building his song writing career before relocating to Nashville in 2007. He plays Americana / Country / Folk Music strumming his way around the globe. He`s over enjoying a few dates in Europe on his `Good Intentions Tour 2019` and tonight he landed at the intimate Kitchen Garden Café in Birmingham. Before we know it, Don picks up his guitar and plays the first three songs alone. A cover of Creedence Clearwater Revival`s classic `Bad Moon Rising` and a song dedicated to his six-year-old boy with `Rhyder`s Song (Along The Way)` amongst them. These cuts are on his new album “In The Name Of Good Intentions” Don`s long time bass player and multi-instrumentalist Travis Stock and guitarist Jim Maving, who has worked with Mick Ralphs of Bad Company and Mott The Hoople fame join him on stage for the rest of the first set. The additional musicians add a real depth to the sound as they share the heart breaking `I`ll Never Be Alone`, `Carousel`, the jazzy `Stay Awhile` written about a girl Don knew from Nashville who moved to Austin and then back to Nashville, the darker `The Golden Rule` and `Midnight Sounds` These tracks coming from Don`s excellent “Hickory” and “Still Here” albums.

The guys play a John Prine cover with the wonderful `Speed Of The Sound Of Loneliness` before closing the first section with `Burgundy Wine` and the rousing `The North Dakota Blues’.

After a short break, Don returns and opens the second set with an acapella version of `Down In The Valley`, the gets the audience to clap as backing to the unnerving `Devil Gonna Come` off his latest release, Don has a real knack for writing songs with life observations with sensitivity, honesty, and some sprinkles of humour and the next few songs really highlight this with `Kicking Up The Pavement`, `Same Ol` Alley Talking Blues # 12`, `Losing Kind` and `Home` The guys offer a delightful version of Lefty Frizzell`s `Long Black Veil` the harmonies a joy to behold. The set closes out with the cracking `Something I Gotta Learn`, thoughtful `Diamonds & Gold`, inspiring `How Many Days` before an extended version of `Banks Of The Mississippi` which merged into the superb `Drift Away` and The Rolling Stones `Miss You` Jim Maving`s fret work was worth the entrance fee alone.

The guys return for an encore which included `Memphis Train` and a great version of the Neil Young classic `Out On The Weekend’.

Rolling Stone named Don as “One of Americana`s true journeymen” and a “ Country / Americana `Artist You Need To Know` The intersection of folk, road-worn country and amplified bluegrass” This was Don`s first visit to Birmingham and those that were there were given a real masterclass in musicianship and showmanship. I certainly can`t wait for this guy to return.