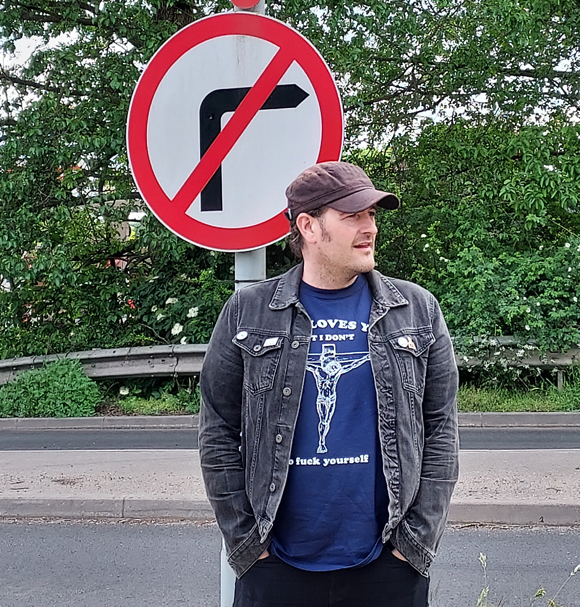 If you’ve had any interest in the UK hardcore scene over the past decade you may know JAMES DOMESTIC from many bands. These include THE DOMESTICS, who have blazed a trail across Europe several times (see the Live in Oslo LP from 2018), plus PI$$ER, TOKYO LUNGS, HAZARD PROFILE, and half a dozen more.

This, however, is a very different beast.

Renaissance man? Perpetual dabbler? He’s a published poet, holds a doctorate (after leaving school with no more than a solitary A.S. Level and a deep mistrust of authority figures), writes three songs a day (“I’ll write three in my head, forget one, demo two, and throw one of those away ‘cos it’ll be crap…the third one will be great though!”), published academic, soul/reggae DJ, producer, and originator of the cult term ‘East Anglian Hardcore’, emblazoned on many young punks in the region (and beyond) in tattoo or t-shirt form.

‘Faze Out’ is the first single to be taken from the forthcoming Carrion Repeating album. A sweep of zippy electroids give way to a creeping, psycho organ riff, fuzz-guitar and bouncing bass, only to drop suddenly for the vocal, and then build again via swirls of angry synths and slashes of punked-up guitar, into the chorus, and back to that lurching organ…and the template has been set for this bruiser of a tune.

Released on Kibou Records through TNS (UK) and Amok (Europe), ‘Faze Out’ is available now on Spotify and all the usual platforms.