DOM THE MAIN MAN FOR ERIC 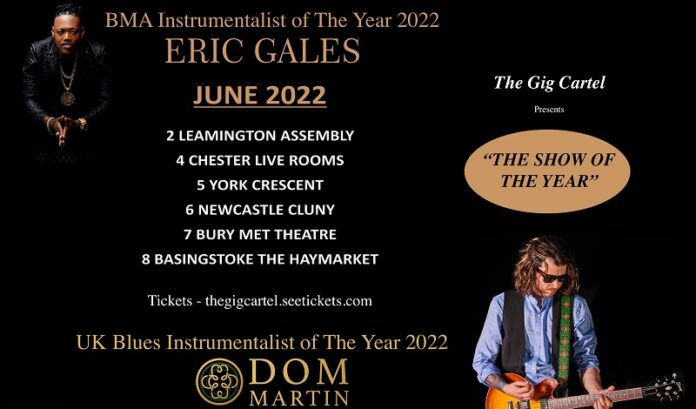 Dom’s support slot on Eric Gales’ UK tour follows the release of his current album A Savage Life which has received rave reviews including Classic Rock’s “Blues Album of the Month.” Dom is featured on the front of Blues Matters and Blues in Britain.
As the UK representative, Dom, recently reached the semi-finals at the International Blues Challenge in Memphis, Tennessee in May 2022.

The music video for Dom’s latest single Echoes, is now streaming on YouTube.

Hailed by many as the blues’ biggest Irish export since the iconic guitarist Rory Gallagher, 2022 looks like it is going to be ripe for the picking for Dom Martin.

“In some respects, the new album is like my 2019 debut album Spain to Italy, but still very different,” says Dom about his latest album A Savage Life. “It’s a mixture of acoustic solo and electric, however, I really wanted to keep this album under-produced so I can reproduce the tracks in a live setting. Similarly, to the Spain to Italy album, the tracks on A Savage Life are mostly based on my own life experiences.”

“A Savage Life is another part of my life story and is also, in a small part, in memory of a great friend who passed away in 2021. It’s my blues, it’s real and I must live with it.”