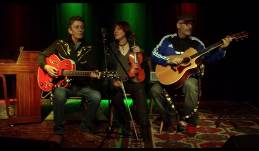 ‘This Dog’s Just For Christmas (Not For Life)’ is an attempt to truthfully answer the old John Lennon rhetorical question ‘and so this is Christmas, and what have we done?’

It’s also the first single from Prosecco Socialist, the new project from ex-Beautiful South’s David Rotheray. Out today, December 8th, it precedes the upcoming album ‘Songs From Behind Bars’, due for release early 2018 on Gypsy Chicken Box Records.

Retiring from music four years ago, David didn’t see himself ever picking up a guitar again. However, idleness was not a comfortable state and, in 2016, he opened a pub in Hull (The People’s Republic). The stories and tales shared by the locals proved too rich a mine for such a narrative, observational songwriter to ignore, and so ‘Songs Behind Bars’ was born.

David has brought together two of his favourite musicians for this project. Irish singer and songwriter Eleanor McEvoy, a long-term friend and collaborator of David’s, shares vocal duties with a Hull living legend, Mike Greaves. Mike is described by David as “a wonderful singer and writer in the country idiom, loved across Hull for decades but mostly unknown anywhere else. I hope this project might serve, in a small way, to help his voice – both literal and metaphorical – to be more widely heard.”

Eleanor also said of Mike, “This is my first time working with Mike. His voice is wonderfully lived in, it has a gravelly texture to it and is compellingly louche. When we recorded the vocal of ‘This Dog’s Just For Christmas, Not For Life’, it just had a certain down, but not quite out, earthiness.”