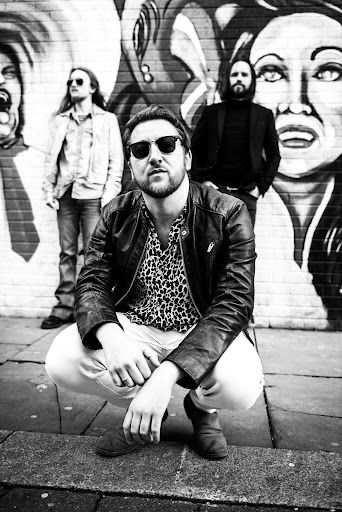 Cavorting their way through a thunderous blend of retro riffs, jovial drum beats and rip-roaring, live-ready vocals, “She Cries Blues” is a fuzzy glam-rock romp that touches on the past whilst barrelling hell for leather toward the future.

After gaining a massive reception on live outings late last year, the track is another assured step forwards for a band keen to connect with audiences whilst staying true to their own jam-packed arsenal of influences. Wanting to build upon the glam 70s stylings that underpinned earlier release “Run, Run, Run,” frontman Gaz Wilcox explains of “She Cries Blues”‘s inception:

“This song is something that’s been with me for a while.  It definitely means a lot to us because it’s always the simplest of melodies and chord progressions that are the hardest ones to find. The songwriting process was really fast — I wrote it in about 10 minutes. I find that in those moments when a song just finds you, it normally just sticks. WIthout overthinking it too much it becomes more natural and flows without overcomplicating things.”

Produced once more by Andy Fernihough and recorded at Liverpool’s 3rd Planet Studios, “She Cries Blues” is a rollicking, vintage-tinged track with a “big and bouncy” mix that yearns to be blasted from the speakers on a windswept, roof-down drive down a desolate desert highway.

Raucous and feel-good, the track is a worthy follow-up to the rip-roaring success of the band’s earlier singles that have seen them surpass 50k streams on Spotify, and amass over 18k monthly listeners. Second single “Run, Run, Run,” which resurrects the rock’n’roll spirits of yesteryear whilst breathing life into newfangled sounds, and was also featured in both Apple Music’s ‘New in Rock UK’ and YouTube’s ‘New Rock’ playlists.  With a full 4-track EP planned and coming soon in 2022, fans can get their hands on early physical copies on CD and vinyl via Bandcamp here: https://mexicandogs.bandcamp.com. A global digital release will also follow.

Following packed-out, wall-to-wall shows in both Liverpool and London over the winter, Mexican Dogs are planning further live shows later this year as follows…