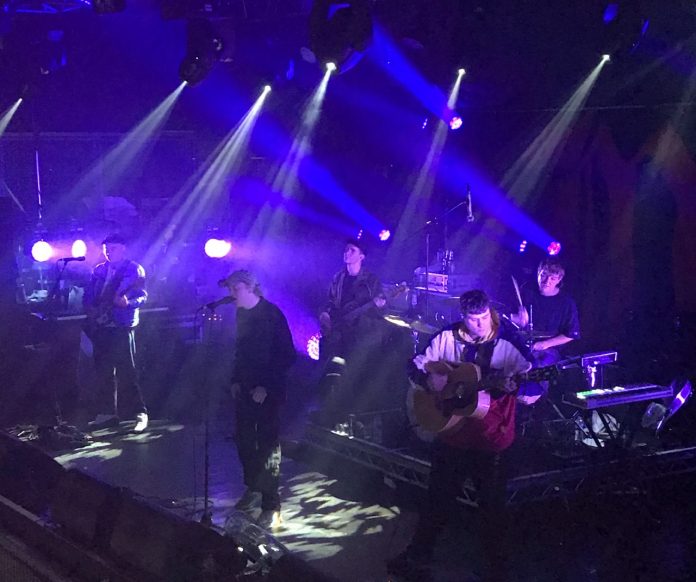 Sometimes you see a band and you just know. You just know instinctively that the group is on the verge.

I remember going to see The Stereophonics at the Wolverhampton Civic Hall about 20 years ago and second song in they played “Bartender And The Thief” and the place went crazy. By the end of the year when we saw them again it was in an arena.

Likewise,  there’s a moment here towards the end of the set, when the three full-time members of DMA’s, singer Tommy O’Dell, lead guitarist Matt Mason and acoustic guitarist Johnny Took – who have been playing acoustically for a few minutes – are joined by their three touring brethren and “Delete” kicks up to its crescendo, and you think: “crikey, these boys are going to be huge.”

There’s been, in truth, an undercurrent of confidence about them since the off. “Play It Out” – made famous by its presence on the FIFA games – is more than a strident opener, and sees beer flying about the place like it was one of those World Cup fan parks in the summer. The inference is clear: Leicester is here for a party and this is the soundtrack. 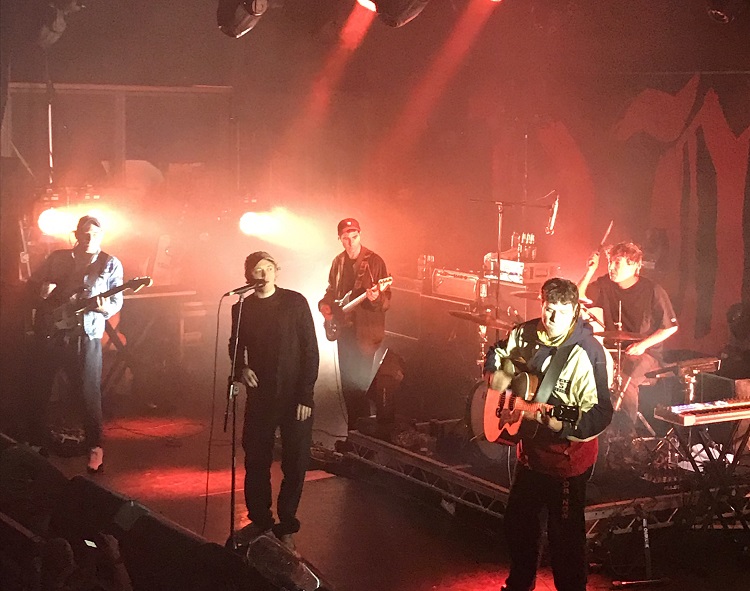 It is interesting, though, that there is a massive cross-section of people present. There’s everything from the kids in the Oasis tops (and let’s have it said, there is a sonic debt to be paid here too) to the lads who are dressed for a night out, to the older people who just want to listen to good music. All three strands are easily satisfied.

And that is testament to the quality of some of the songs here. “Dawning” is the first of a clutch from this year’s “For Now” album, and brings with it some chilled, summer vibes to a freezing East Midlands winter evening, and as early as track three “Melbourne”, O’Dell is confident enough to instigate a singalong and milk the adulation.

The Sydney six piece (on tour they are at least) seemingly have a gift for writing arena ready anthems. “In The Air” is one that sees girls hoisted onto shoulders as if it were a festival field, while “Time And Money” sees Took take to the Synth, which coupled with Mason’s superb guitar work becomes a real highlight.

“Step Up The Morphine” is another the packed crowd laps up, “Lazy Love” does have an Oasis type feel, while “For Now” pulses darkly, part Kasabian and part Stone Roses. They are versatile enough, though, to switch pace with the acoustic arrangement of “The End” and “Emily Whyte” shoots for the rafters with its massive intent.

The encore – interestingly – has a much heavier, almost punk tinged feel. Partly perhaps because the vibe demands it, but maybe too that they’ve paced the show so well. “Feels Like 37” from their debut is genuinely raw sounding, with “Laced” and “Lay Down” not letting up the pace either – and the football crowd feel is only underlined when a flare is set off at it’s start.

Before that last one, O’Dell waves at his people. “Thanks for having us,” he says politely. “We’ll see ya next time, yeah?” I’d venture to suggest that the next time might well be in a much, much bigger room than this. There is only one way DMA’s are heading.

Previous article
A REISSUED HANGOVER
Next article
BAND OF THE DAY: ICARUS FALLS