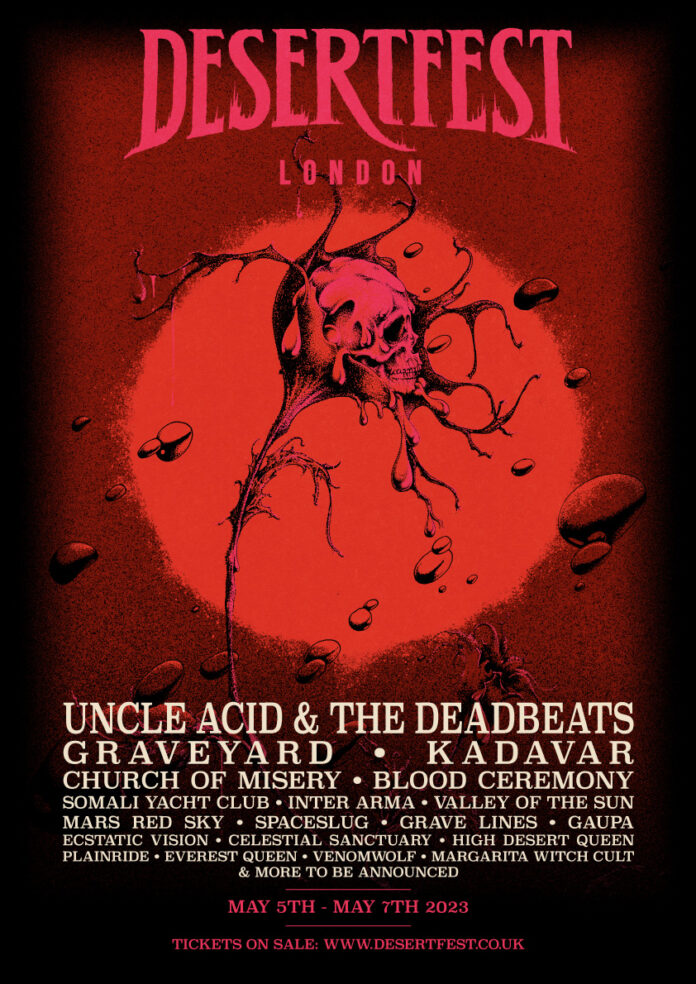 Returning stronger than ever thanks to the unyielding support of a steadfast fan base, Desertfest is now entering its eleventh year in May 2023 as the UK’s leading stoner rock, doom, psych & heavy rock festival. As well as bringing the biggest names in the scene, Desertfest prides itself on diversifying line-ups and providing a platform for lesser-known artists to play an array of venues to differing crowds within the underground music scene.

Kicking off the initial 2023 announcement, the festival will be welcoming cult heroes Uncle Acid & The Deadbeats to headline the Roundhouse for the very first time. As one of the most widely-requested bands in the Desertfest-sphere, the Uncle Acid amalgamation of riff-driven hard-rock & trippy melodic weavings has allowed a uniquely original, yet utterly timeless beast to form – in an otherwise often straight & narrow realm.
There’s little debate that Uncle Acid & The Deadbeats debut Desertfest performance will soon be a thing of legend, to miss it would be at one’s own peril.

The festival also makes way for Swedish heavy-blues maestros Graveyard, eliciting raw emotion with their lyrical prowess & introspective compositions. One of the greatest live acts of all time, German groovers Kadavar and worshippers of vintage occult folklore Blood Ceremony, all of whose boundary pushing retro-rock sounds make a gratifying return to the event.

For those with a heavier appetite, macabre Japanese doom legends Church of Misery, genre-bending nihilists Inter Arma & London’s own gloom heroes Grave Lines should be a delectable entrée to proceedings.

Ukraine’s Somali Yacht Club will undoubtedly meet a rapturous reception when their flawless musicianship makes its long awaited Desertfest debut. Dynamic US rockers Valley of The Sun will make their first ever DF appearance, as they quickly propel themselves onto ‘must see’ lists across the globe.

Poland’s own Spaceslug will bring revellers into a world of atmospheric sci-fi influenced proto-doom, whilst the unique sounds of Mars Red Sky, Gaupa & Ecstatic Vision also up the ante with their progressive fusions of stoner & psychedelia.