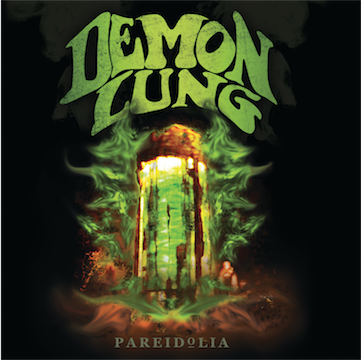 The Las Vegas-based doom metal quartet DEMON LUNG – who Pitchfork says “harken back to the arching lurch of classic Candlemass and the distortion-caked tones of Electric Wizard” – have released a lyric video for their haunting and powerful rendition of the Danzig classic “How The Gods Kill.”

“Those early Danzig albums are obviously a major influence on us. ‘How the Gods Kill’ has a certain evilness to it that always set it apart, and we tried our best to do it justice,” explains drummer Jeremy Brenton.. “We spent a lot of time recording the song because it means so much and we wanted to pay tribute respectfully. Hopefully everyone can hear the love that we put into it!”

“How The Gods Kill” appears on the recently-released expanded vinyl and digital reissues of DEMON LUNG’s 2012 debut EP, Pareidolia. Initially released as a four-track CD, Pareidolia now features an additional three songs on top of the Danzig cover – the original song “Pray For Rain,” which dates back to the original Pareidolia recording sessions, as well as covers of Wounded Giant’s “The Road To Middian” and Twisted Sister’s “Captain Howdy.”

The limited-edition vinyl edition (only 300 copies) of Pareidolia is available in green-and-black marbled wax and includes a color lyric sheet and a download card. It can be ordered at www.m-theoryaudio.com/store.

DEMON LUNG have built quite a reputation for themselves via two critically acclaimed albums on Candlelight Records and live appearances all over the West Coast with bands like Candlemass, Crowbar, Venom Inc., High On Fire, Eyehategod, Today Is the Day, Saint Vitus, Pentagram and more. The group recently performed alongside Royal Thunder and will next support The Atlas Moth and Mustard Gas and Roses in their Las Vegas hometown on June 7th at The Beauty Bar.

Previous article
BAND OF THE DAY: CALM FOR THE RESTLESS
Next article
VENOM GO TO WAR