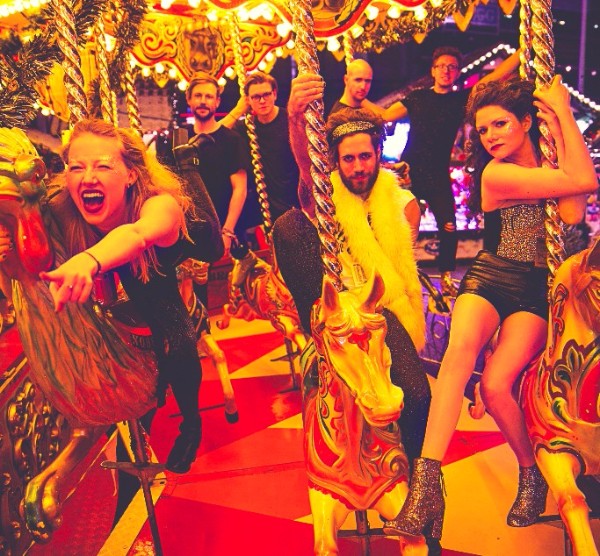 Theatrical punks Felix Hagan & The Family have released their brand new single ‘Delirium Tremendous’. The song is a twisted electro rock stomper with a glitter-smacked take on its dark troubled themes.

Regarding ‘Delirium Tremendous’ Felix Hagan says, “The song is a piece of dark disco about going through substance withdrawal. It’s inspired by my own journey out of addiction.”

Felix and his band’s on-going mission is to cram British pop music with the exuberance and majesty of grandiose, flamboyant rock’n’roll. ‘Delirium Tremendous’ follows the release of the highly acclaimed 2015 EP Kiss The Misfits and is the first taste of their debut album due later this year.

Felix Hagan & The Family deliver sharp lyricism, with songs that deal with typically dark subjects – depression, addiction, the loss of young dreams and the torpor of everyday life. They then set them on fire in a joyous explosion of spectacle, reminiscent of the sparkling likes of Scissor Sisters and Queen.

The band have recently been touring with Frank Turner who said, ““Within about 30 seconds of them taking the stage, I was sold, a total convert, a newly-signed-up member of the cult.”

Felix Hagan & The Family came into being in the heart of Liverpool’s burgeoning musical scene during 2013. They moved to London and honed their brand of theatre-pop over hundreds of gigs around the country, winning great acclaim for their insane live shows, consummate musical skill and total dedication to the audience.

With more of their hair-raisingly entertaining live shows to be announced shortly, it’s time to get the dancing shoes ready – the punks are waiting…