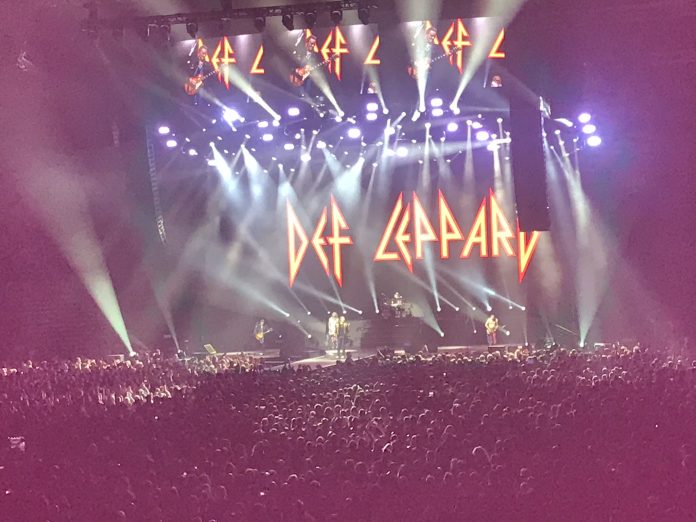 Lemmy used to say “Don’t give the public what they want, give them what they need”. Those words rang around my head for most of tonight, in honesty, but never more so than when Roy Wood strode out with Cheap Trick here. Straight way, I’m thinking: “he’s gonna do it, isn’t he?” And he does – the snowman duly brings the snow and all that. But after “California Man”, which at least reminds that everyone here can knock out a glam classic. Wood’s presence does provide some focus  in Cheap Trick’s set though, and although I have to be honest and say they are my favourite band of the two tonight, I’ll also need to say that they’ve had better nights than here. Some of the greatest pop rock songs ever, yes, but there seems something missing. Even in the usually mighty “Want You To Want Me”. “Dream Police” is better, “Surrender” is one of those things that is impossible to resist – stick anyone, anywhere, and they’ll be going ‘mommy’s alright. Daddy’s alright’ by the end – and “Goodnight Now” does see Rick Neilsen” get his five necked guitar out. At the end Robin Zander suggests he’ll see us next year. When he does, I fervently hope it’s as a headliner like they should be, but good God, that it isn’t December.

“Hysteria” made Def Leppard megastars. Like every other 12-year-old rock fan I bought it too. I am staggered how much of it I still know – despite, in truth, not listening to it for 20 years.

It’s like this. “Hysteria” is Def Leppard in microcosm. When its brilliant – “Armageddon It”, “Animal”, and the title track, it is amazing. When it’s bland, its bland and when its forgettable it is forgettable.

But that’s kinda the point. Def Leappard have made a career out of the odd absolute knockout blow. Come on, “Pour Some Sugar On Me” who doesn’t know that? There’s a woman next to me who is having the time of her life for five minutes and that’s what this is for. Whatever critical moment of your life it was the soundtrack for can be recalled, if you want.

After they’ve done with it all, they come back for five more and again, it’s a mixed bag. “Action” by Sweet? Yeah they’ve done it, but why play it here? “When Love And Hate Collide” was sentimental crap back in the 90s (even if one of my mates did think it was about every girl he knew – he’s in the gig tonight too) and it’s not much fun now either – but Christ, its chest beating, soaring and testosterone fuelled.

But then, in typical style, they pull out “Lets Get Rocked” and the whole place gets it, “Rock Of Ages” crushes and then “Photograph” is put simply, the best arena rock song ever written.

I saw something on Twitter the other week to the affect that the likes of Coldplay and U2 were no ones favourite band but managed to connect enough with a few songs to fill stadiums so people could watch them do those numbers.

Are Def Leppard the rock equivalent?  They are about as dangerous as a night round your nans drinking warm milk, but isn’t that their charm? To paraphrase the a man we quoted at the start, they ain’t born to raise hell, but they know how to do it, and they do it real well.