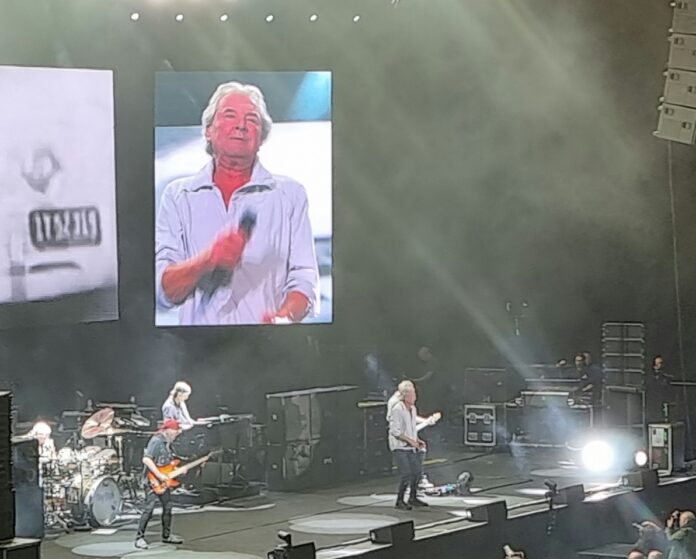 “Do you know,” says my mate, sat beside me. “If I’d written a song this good I’d be sat in the Caribbean in my Budgie Smugglers”. Notwithstanding the mental image, when it comes to Blue Öyster Cult, he’s got a point. For the avoidance of doubt he’s talking about that one, the one where there’s a discussion about Reaper’s and whether they should be met with trepidation or not. The answer is you don’t obviously, but here’s the thing: If you’re BOC and you’ve been at the top for 50 years, you can probably look back on your career with pride. And for almost an hour tonight, they set about celebrating that. Buck Dharma, has been in the band since 1967, Eric Bloom on vocals for nearly as long and all that experience shines through here. They start with the very first song on their debut album and “Transmaniacon MC”, if it came out tomorrow, you’d buy it. Trying to define BOC’s sound is like trying to nail water to a wall. A bit of everything is the best way of putting it. “Burnin’ For You” is a sort of pop song, “Hot Rails To Hell” sees Richie Castellano on the mic – he later puts in a genuinely stunning solo on “Then Came the Last Days of May” – for something altogether rock n roll, and there’s a couple of mega hits before we’re done. “Godzilla”, introduced by Dharma, is as dumb and fun as it gets, before the copper-bottomed classic ends things. If the internet is right, Blue Oyster Cult have sold 24 million records. They could conceivably have headlined here themselves. As such, they can probably do nights like this with their eyes shut. That doesn’t make them any less superb, though.

Of course, if you have the pull to get a big band to open for you, then you’re probably legends. So lets not mess about here, Deep Purple have a legacy that few British hard rock bands can match, or indeed ever will.

But they’re playing “No Need To Shout” as their third song, when it hits me.  There’s no band, not really, that sounds like them. No band, really, has the guitar and the keyboards in a kind of fight to the death like the Purps do.

They’ve already done “Highway Star” and “Pictures Of Home” by this point, so that’s enough to have worked out a few things. First Ian Gillan’s voice is….ok. Then guitarist Simon McBride is sensational. In the band because of Steve Morse’s family issues, McBride has breathed new life into them it seems.

“Nothing At All” – like “…Shout” from the recent (ish) “Whoosh!” album, provides a mellow interlude, but “Uncommon Man”, which Gillan dedicates to Jon Lord, is pure McBride. Its one of a few solos that punctuate the set (presumably) to give Gillan a break, these work best when, like “Lazy” they are part of the song itself.

“When A Blind Man Cries” is another from “Machine Head” (50 years old this year) and it underlines the class of that album, but it’s a newer song “Anya” that particularly impresses. A mere 30 years since its inception, this, it’s power metal without the leather and its fabulous.

After Don Airey’s keyboard solo, there’s something of a hurtle to the finish, with “Perfect Strangers”, “Space Truckin’” and the one with the riff you know. McBride does that opening brilliantly too, and it is incredible how well he’s fitted in and how good he is.

Old pro’s encore, of course, and “Hush” is funky and fun, before Roger Glover’s bass solo is basically a way to get to “Black Knight”. I look behind me when that’s being played and there’s one of the venue stewards, a man in his early 60s at a guess, who’s left his post and is drumming along with Ian Paice.

Then you realise what this band has meant and still means and how everything else is basically secondary to the fact they are here and celebrating just that.

There’s no pyro at the end, and little bombast throughout, what there is for 100 minutes is exquisite musicianship and a collection of some truly wonderful songs.