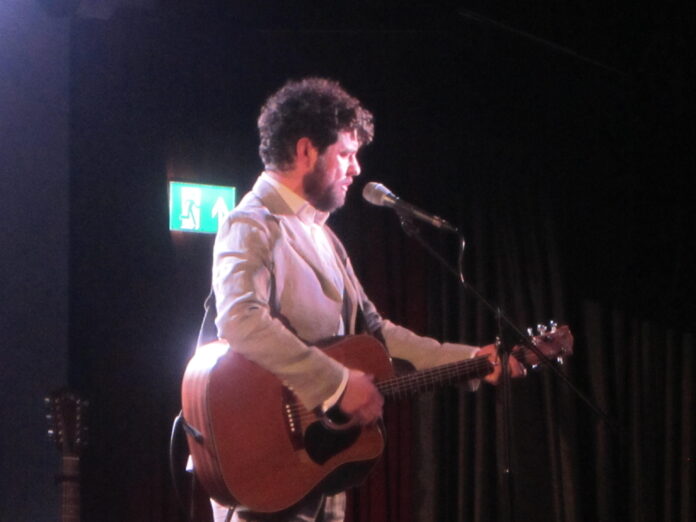 Dublin born but Galway based singer, songwriter, and musician Declan O`Rourke arrived in the UK`s second city tonight for the debut show of a nine date trek around the country in support of not only his stunning seventh studio album `Arrivals` produced by Paul Weller but also his debut novel `The Pawnbrokers Reward`.

There`s little fuss as he takes to the stage and begins with a kind of summery of months gone by and it being the laziest year, seemingly a reflection on the recent pandemic, a song I have to say that was not familiar to me.  Declan sits at a piano to share the title track off his latest album `Arrivals`, a delightfully reflective contemplation.

Understandably a fair portion of tonight`s set comes from the most recent album and `In Painter’s Light` had me pondering on Oscar Wilde as a line in the song “each man kills the thing he loves” has been attributed to him and fellow Dubliner Gavin Friday`s first album was named after this. The cautionary `Andy Sells Coke` follows and the poignant `Have You Not Heard The War Is Over` which has this packed audience singing along.

I have to admit I love `The Stars Over Kinvara` which was written for the singer`s three and a half year old son Londubh, the first child born in Kinvara for 102 years. It references Declan`s grandfather Miko Killeen who left the village in 1937 to become a painter in Ipswich. A wonderfully moving song that would bring a tear from a stone and made me reminisce about my own father who left a similar village Doonbeg, in County Clare a few years later.

There are some older tracks shared with `No Place To Hide` and the dreamlike `Sarah (Last Night In A Dream) before we enjoy ‘Zeus and Apollo’ an interesting slant on single parent families from a conversation between the father and son Greek Gods.

Declan`s novel `The Pawn Brokers Reward` is released this week and he reads a few passages from this historical fiction which conveys the famine as it happened related through the ua Buachalla family and the town of Macroom, Co. Cork.

The music returns with `Whatever Else Happens` and has the audience again singing along before we have a stunning unaccompanied offering of the moving `Marrying The Sea / Til Death Do Us Part`. Declan closes out with a couple of numbers from the latest release. `Olympian` is first up a track about young Syrian swimmer Yusra Mardini and her fraught journey across the Aegean Sea to escape her war-torn homeland before competing in the 2016 Olympics in Rio de Janeiro as a member of the Refugee Olympic Athletes Team. The descriptive `The Harbour` brings the show to a climax.

The singer doesn`t usually go in for encores but as this is his first tour for a couple of years he hides behind a curtain before returning for a two song encore which includes `Trees` adapted from a poem written by Alfred Joyce Kilmer who was killed in the first world war and probably the singer`s best known song `Galileo (Someone Like You) `.

At times tonight Declan made it seem very simple but totally overwhelming. There was a captivating intensity about the songs shared and the manner in which they were delivered. As I left the venue my friend summed it up succinctly saying that it was the sort of show that you will look back on in the morning and start to fully appreciate the passion and power shared.

Declan O`Rourke is a wonderfully gifted wordsmith and the songs in his live shows will touch you to the core.