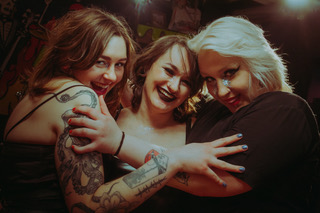 ‘This track is not just about me and my problems and feelings that I faced in my teenage years. It is a story about a girl who goes against “social” rules, breaking stereotypes and fears on her way. How else can you describe this girl? Only – Miss Revolt!

This track is meant to be a wake-up call for those people who suffer from social rejection. You should not be silent and keep all this inside yourself! Be above that and you will be heard!’

It’s significant how many female punk bands are using the stance and attitude of the ‘Riot Grrl’ movement as a touchstone for what they are about, but it doesn’t end there. From the classic punk of Black Flag, The Distillers and Circle Jerks, to modern outfits like Axe Rash and the thrash metal of Nervosa and Exodus, there’s a nod to all of this in Death Pill’s visceral sound. Full on and fully formed.

That aside, what makes this release even more pertinent, and the fact that it is happening at all, is that Mariana, Anastasiya and Nataliya are from the Ukraine, who’s troubles are well known to all of course, but naturally enough have hit the band very hard.

Just imagine:  You are a 20-year-old girl. Society constantly puts pressure on you: you should find a nice husband, have children and at the same time build a successful career. But no one asks what do you really want? What are exactly your interests and ambitions?

Because maybe you want to be a punk rock star?

Yes, I do and even against it all. I can create a female non-commercial band, play heavy high-quality music, and ignite the crowd. After all, rock is not only about brutal men with curly long hair, right?

Nafa (Anastasiya), the drummer, also got sick of this idea. Together we created an all-female punk rock band Death Pill (2017), just like we wanted to! Before COVID started we played a lot of gigs at the main underground festivals in Ukraine (“Back to Youth”, “Burn the Scene for Fun”). We also released EP (2018). We had a lot of success in front of our audience, which led to the creation of more female bands.

We did have trouble with bass players. They changed one after another and we were looking for someone who would be “on the same vibe” with us …

There is a strong and super friendly community of people in Ukraine. It’s a big family of true music lovers, people who live by creating the Ukrainian underground scene. This is also how we met Nataliia. After our first practice with her, we realized that this is a real perfect match, and the problem was solved. We started recording our first full album, filming music clips etc.

Until the war comes…  In February fucking Russia started a full-scale invasion of Ukraine. It really changed our plans, dreams, and attitude. So now we are spread out, Mariana stays in Kyiv, Nafa is in Spain, Nataliia is in Australia. We try to stay in touch online, we keep working on the album and support our defenders. Like all in our Ukrainian scene.

Some do it with weapons in their hands, some volunteer and help in any way they can to bring our victory closer. Hard times, but right now we have a real chance to change lives for the better.

Victory will be ours; we are sure of it.

P.S. It is soon, and we have already decided to make the most hot, amazing and gig ever!

So there is hope for sure, and as this album amply demonstrates, plenty of fighting spirit.

Producing a ‘killer record’ under such extraordinary circumstances was a challenge too. Tracking started during Covid and was completed in late 2021, only three tracks were mixed before the war hit. However the band and their production team were able to somehow continue and finished everything including the artwork in 5 months whilst the Russian invasion rolled on. A testament to their drive and single mindedness.

The musicianship and commitment on display is undeniable, plus the tracks on the album have been totally remastered for this release, sounding as fat and full as a raging whirlwind.

Although things are uncertain, the band are still strong and still together, and New Heavy Sounds are going to be pulling out all the stops to get Death Pill over to the UK to showcase what will undoubtedly be an awesome live experience.

‘Death Pill’ will be released on limited edition white with red splatter vinyl housed in a full colour single sleeve with a printed lyric inner. Full download included. There will also be a limited CD version in a 4 panel digipack with a 12 page lyric booklet. It will also be available on all digital platforms.

Death Pill is set for release on the 24th February 2023, perhaps fittingly a year to the day that Russia invaded Ukraine.