DE WOOLF TALK IT UP 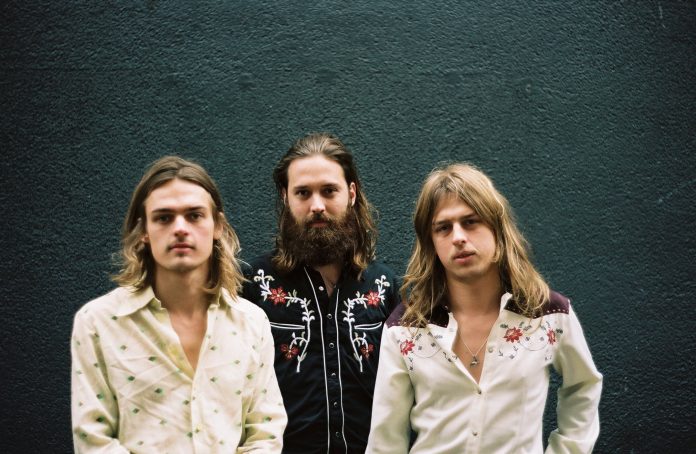 Psychedelic trio DeWolff are delighted to reveal their new dark and horrifying video for Big Talk. The track is taken from their upcoming album Thrust, out May 4th via Mascot Records/Mascot Label Group. To celebrate the release of Thrust the band will be playing a special show at The Black Heart, London on Tuesday 15th May.

Speaking about the track the band said “Every second you live there is a fork in the river where you can just follow the stream, do what other people expect you to do, think what other people tell you to think… or you can take control and live the best life you can live. For yourself, for other people, for the world. Don’t let anger control you and don’t let lies corrupt the kindness and innocence with which we’re all born. Don’t let the Big Talk kill ya, like the guy in the video. Or is it this killer new track that’s so lethal? We wanted to make a video with a very strong and simple concept. We came up with the idea of a man who swallows everything that’s being put in front of him. Director / DOP Christiaan Kanis took our idea to the next level and using a RED camera (Stranger Things was shot with this camera) he created an intense and beautiful yet horrifying cinematic experience. The actor you see is our friend Mitch Rivers, an amazing songwriter and musician himself. The result is definitely the most incredible music video we’ve ever released.”

Now staples in the Dutch Top 10 Album Charts, on the new album ‘THRUST’, they tackle contemporary social and political issues on ‘Deceit & Woo’ which was written on the day of Donald Trump’s inauguration and they explore the political climate closer to home on the opening track ‘Big Talk’. ‘California Burning’ attacks todays loud mouth society, they tackle gambling on ‘Tragedy, Not Today’, dark undertones on ‘Swain’ and they approach the god of death on ‘Tombstone Child’.

They formed in the Netherlands’ Deep South of Geleen, when they were barely teenagers in 2007 by brothers’ Pablo (singer/guitarist) and Luka van de Poel (Drums) and Hammond organist Robin Piso. They have released 5 studio albums previously, all have catapulted them up the charts in their homeland. Whilst still in their teens they played the prestigious Paradiso in Amsterdam and took to the mainstage at PinkPop Festival in front of 10,000 fans, relentless touring followed, earmarking them as a formidable live act. Since then they’ve played to 30,000 at Lowlands Festival, 15,000 at Sziget, as well as Reeperbahn, Rockpalast, Rock Oz Arenas and supported The Black Keys, Blues Pills, Ten Years After, Deep Purple and count Seasick Steve as a fan.

They’ve played Castle’s throughout Europe, been invited to perform at a Russian millionaire’s birthday party in Berlin, they had bodyguards for a show on a Moscow rooftop and at a Biker festival just outside the city, they came face to face with unexpected pyrotechnics, nudity and watched fire spread across the stage during their set.

In 2017, the band celebrated their 10th Anniversary in fine style as they headlined their own DeWolffest to 3,500 fans with support from amongst others, Wolf People and Little Barrie. Ten years of being a band and wanting to produce your greatest record to date has made ‘THRUST’, a full representation of the DeWolff live experience incorporated with the in the studio experimentation. It represents the sound of rock ‘n’ roll in 2018; equal doses of anger, frustration, emotion and at times disillusion with the state of the world today and all delivered in a hooky and gloriously epic fashion.