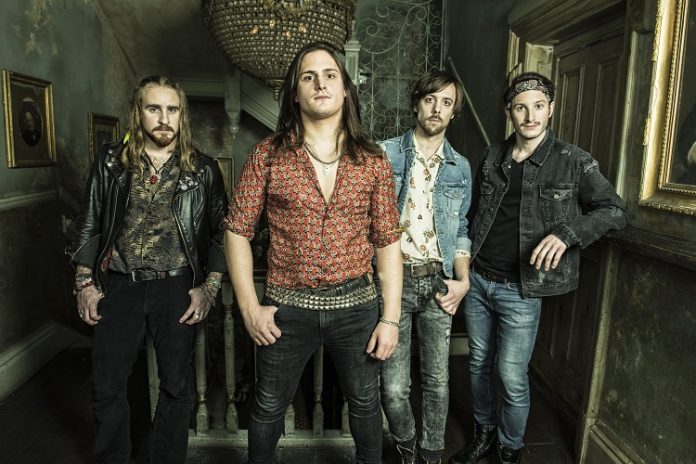 Daxx & Roxane are pleased to announce the limited edition red vinyl version of their 2017 album ‘Ticket To Rock released through Justice Brothers on 31STOctober 2018.

Off the back of an intense and successful 2018, Daxx & Roxane are ready to cap off the year with an extensive tour throughout October and November as special guest to Bad Touch.

Earlier this year, Daxx & Roxane released the stand-alone single “Junk Food Hangover”, which saw the band take a slightly different direction to the sound of their debut album, drawing more of a Chili Peppers/ Extreme funk rock sound of the late 80s and early 90s. Huge guitar licks completed by a soaring groove rhythm section. The track was recorded at actor Dominic Cooper’s recording studio Fiction Studios as a result of him hearing the band’s debut album.

Formed in 2013 in their native land of Switzerland Daxx & Roxane have since released their “4×4′ E.P to glowing reviews, which spawned two singles ‘Wrong Side’and ‘Girl Next Door’and debut album ‘Ticket To Rock’ in April of 2017 which also spawned two singles ‘Ticket To Rock’and ‘Leaving For Tomorrow’. These, along with ‘Junk Food Hangover’, all spent 10 weeks on the Planet Rock playlists respectively.

The band are currently in the studio working on the follow up to 2017 ‘Ticket To Rock’ with Brit Award-winningproducer Pedro Ferreira(The Darkness – “Permission To Land’, Stereophonics, Enter Shakari):

“I haven’t had this much fun in the studio for a very long time. Daxx & Roxane are not just fun to work with they are a fantastic bunch of musicians and they totally rock.” – Pedro Ferreira

With an extensive live experience under their belt, including: support slot for HIM at the Roundhouse, headline shows across the UK and live performance at prestigious festivals such as: Montreaux Jazz Festival (Switzerland) and Stone Free Festival (UK), Daxx & Roxane are now ready to hit the road once more as special guest to Bad Touch. UK dates are as follows: