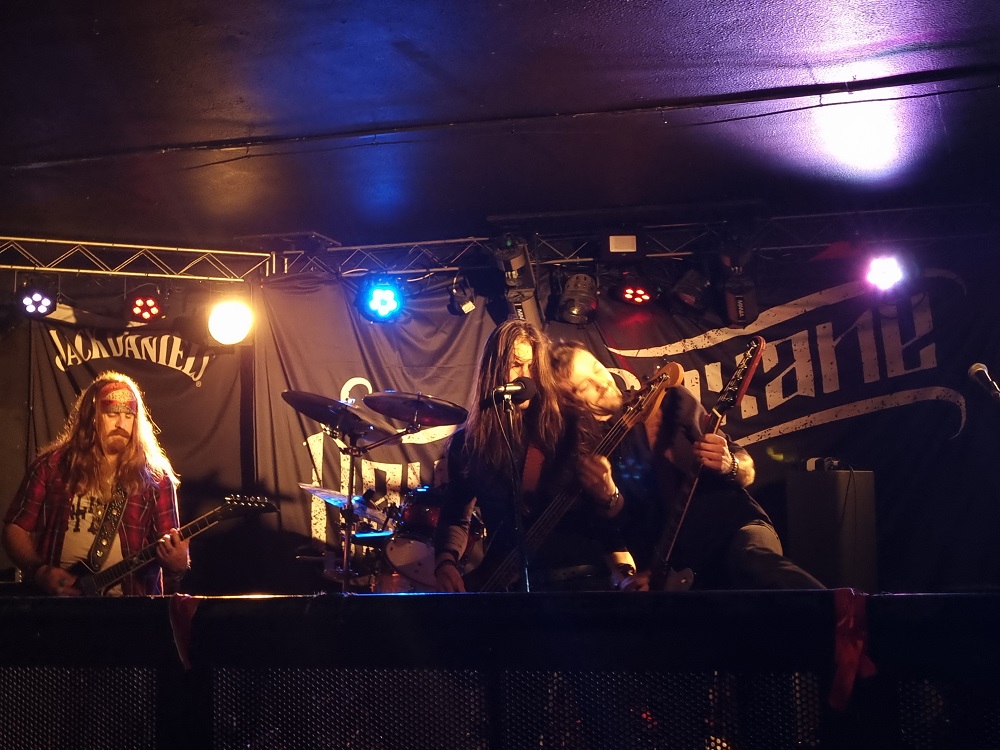 “Good Vibes” is more than the last song of Daxx And Roxane’s set. It’s actually what you wish them, because – and this is kind of the thing you’re meant to write in conclusions – if ever there was a band that deserves so much more, it’s the four of them right here.

You watch as Cédric Pfister shimmies on the drum riser, you laugh with as Cal Wymann he jumps off it, and you marvel at the sheer chutzpah of drummer Luca Senaldi as he plays the set topless. Lets just say it isn’t warm in the Asylum’s upstairs room.

Daxx And Roxane think they are in an arena. Lead guitarist Simon Golaz looks like he went to the Rainbow Bar and Grill in about 1986 to see Great White and hasn’t gone home yet. And they are sort of half living their dreams.

The half is this: They are good. I mean seriously damn good. They do catchy, bluesy hard rock that’s been given a kick up the arse as well, if not better than anyone out there. I first reviewed them in 2017 when they stuck out their mighty “Ticket To Rock” album (and that title track still sums them up) and I’ve seen them live on three occasions since, so I feel qualified to talk about their merits.

They’ve got everything you need. Pfister looks like a frontman of a hard rock band. They’ve got a slow song “Heal” could and should be a tear jerker and they’ve got songs that sound like Motley Crue circa “Wild Side” with added harmonica from Golaz (a blues groove is kind of like a thread that runs through their 45 minutes). They’ve also got “Wild Child” which takes on an anthemic flavour.

The problem is, and this is the reason that you can only say they are “half” living the dream. And at the risk of using the same line I did when they opened for The Dust Coda, the elephant in the room is that you could fit an elephant in this room and still have space for the rest of Noah’s Ark.

I hate being negative about any gig – especially one as good as this one from a band as good as this – and judging by the pictures on social media the three shows so far on the tour have been well attended. This one is as Pfister notes “intimate” (in a way that covers it, although there’s probably been more at a gang bang in truth).

A mate is here tonight and reckons he saw them at Winterstorm Fest and the place was bouncing with 200 in the tent. That’s what D & R deserve. And I genuinely feel sorry for them here.

Their cover of “Superstition” breathes new life into the Stevie Wonder song, and “Lust And Love” is slinky and funky and the work of a band that just needs that big break somehow.

Which brings us back to where we started. “Good Vibes” is a brilliant song, and there’s an irony here. People love this band. They should too. Maybe I had it wrong and Daxx And Roxane don’t deserve better, they seem to get more everywhere else after all. Maybe the second city just doesn’t deserve them.