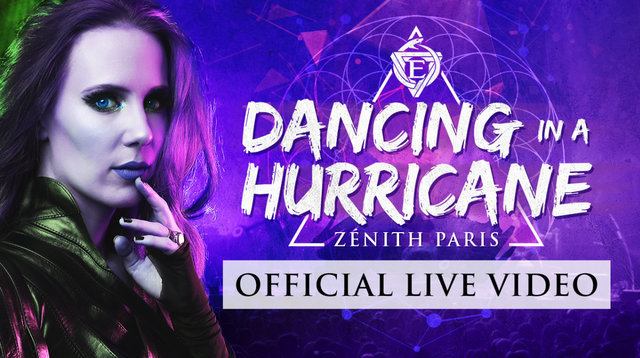 Dutch Symphonic Metal giants EPICA are proud to announce the launch of their brand new live video ‘Dancing In A Hurricane’!

The track has been taken from the band’s latest output The Holographic Principle, which was released via Nuclear Blast in September 2016 and charted worldwide. The video was captured during EPICA‘s SOLD OUT show at The Zenith in Paris last February where the band closed their most successful European tour to date together with an excited legion of 5000 fans! This live video perfectly mirrors the band’s non-stop innovation and their continuously improving live performance.

Coen Janssen comments on the video: “When you are in the midst of touring, you tend to forget how special it is and how privileged we are to be able to perform every night. The show in Zenith Paris is an absolute highlight in our career and therefore I am extra happy we decided to shoot some live-videos of this show. This first one, featuring one of my favourite songs on »The Holographic Principle« takes me back to this night instantly so I can relive the moment again and again. The video shows me in retrospect what an awesome tour this was!! Thank you all again for joining us that night and for making our days brighter all the time!! Enjoy!!!”

The video was captured and edited by the video production team “Panda Productions“. You can check out this stunning video through this link: https://www.youtube.com/watch?v=m1qRwjqjurQ

In November and December EPICA will headline throughout Europe on their “The Ultimate Principle Tour“, bringing along supports Anneke Van Giersbergen‘s new all-star band VUUR and Tunisian Progressive Metal band MYRATH. The band is currently touring all over the globe in support of their latest album The Holographic Principle.