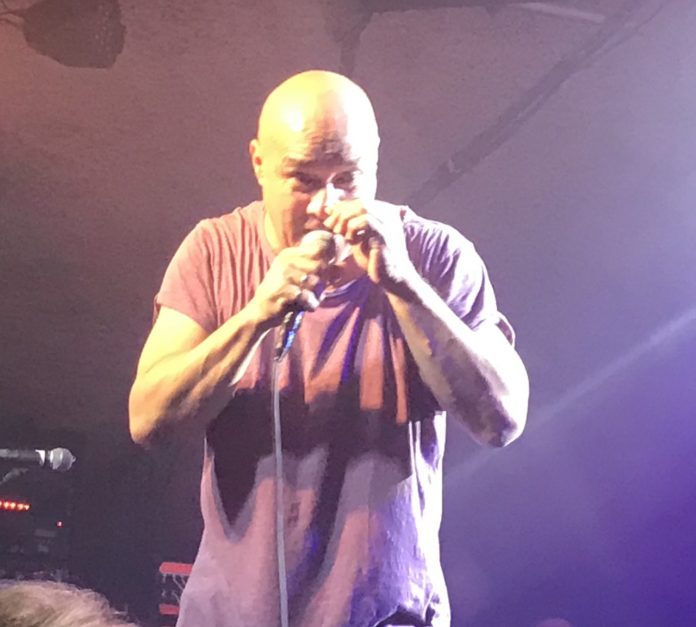 Having only seen Dan Reed twice before – once as an acoustic support to The Quireboys and once when he and his Network brilliantly opened for Extreme last year, I wasn’t too sure what to expect from a full DRN show.

Whatever I was imagining might happen I didn’t conceive for a second that at one point they’d do a medley of tunes that included “Enter Sandman” and “Relax” by Frankie Goes To Hollywood, I probably didn’t think that he’d stop a song because “we’ve been doing this too long to sound this shitty…..” and I don’t think anybody – least of all the sticksman himself – thought that drummer Dan Pred would sing the old blues classic “Ice Cream Man”.

But he did. All those things occurred in a 100 minutes with Portland’s finest funk rockers that suggested anything could happen – and probably would.

The evening had started in much more sedate fashion. Reed himself handpicked the supports and took the trouble to introduce them too – a nice touch, and both Hollowstar (who unfortunately – to be truthful – I didn’t see much of) with their brilliant song “All I Gotta Say” and Glasgow’s Mason Hill show that Reed’s faith was well founded.

Mason Hill appear to have it all in front of them. A sound that is beefed up by a rhythm guitarist is harder edged than many of their hard rock contemporaries, meaning things like “No Regret”, “Survive” and “Hold On” pack a real punch. Where they do score, though, is that their slower material is better than many. “Out Of Reach” for one and the highlight of “Where I Belong” which has a touch of their countrymen Biffy Clyro about it. New single “Against The Wall” is chucked in, along with old favourite “Now You See Me” – which to my tastes are infinitely preferable than finishing with Audioslave’s “Cochise”. Mason Hill are at the beginning of their trek, but there is reason to suggest they’ll hit the summit at some point in a bright future.

Dan Reed Network did that, of course, and have lived to tell their tales. Their second incarnation (unlike most bands who do this four of them are still the same – which accounts for the in-jokes and the evident bond and camaraderie) is one built on fun and doing what you like.

To that end, “Rituals” – their new album – was recorded live in studios with fans as part of the process, and features some new songs and some new versions of old ones. “Divided” one of the new ones is superb and is played here early to emphasise it.

“Forgot To Make Her Mine” struts its funky stuff and the band have fun playing it, and “Doin’ The Love Thing” – a song they didn’t play much years ago – is welcome.

“Baby Now I” features the medley, and a bass solo from Melvin Brannon II which shows his incredible talents, then there’s “Rainbow Child”, which sounds as fresh now as it ever did back when we all (well me and Dan, anyway) had a bit more hair.

“Champion” from 2016’s “Fight Another Day” gives its message of positivity, and “Save The World” would do likewise, except Reed jokingly ends it early, accusing Brion James, the bands superb guitarist of being – shall we say – a little too mellow at last night’s rehearsal.

He is keen they redeem themselves, and they do, with “Get To You”, the mighty ballad “Stronger Than Steel” and another new one “One Last Time” before “Ritual” is just that.

They choose to end with an acapella version of “All My Lovin’” as if to re-enforce the idea that this time they’ll please themselves and their fans and not worry about anything else – or anybody’s else’s opinions. Just before the end Reed says that they’ll be back in 2020 with a new album, which will be the “biggest and best statement we can make”. The inference being that this second wave that Dan Reed Network have been riding these last six years isn’t slowing down anytime soon.

They are unlike pretty much anyone else and – give or take a few first night of the tour teething problems – they proved it here.