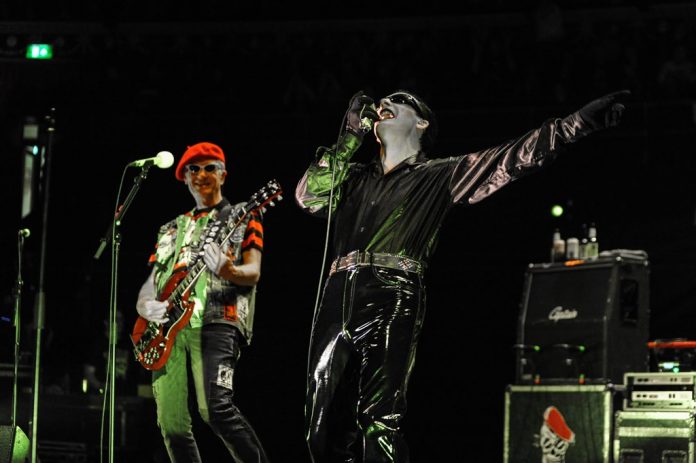 October 22, 2016
Reading time: 3 min.
Facebook
Twitter
Pinterest
WhatsApp
Linkedin
Email
Print
Telegram
Copy URL
By Andy Thorley
Touring all over the place
Punk legends The Damned have announced a huge UK tour taking in more than twenty towns and cities across the UK, and have revealed they are currently working on a brand new album for 2017.

Celebrated as the most entertaining of the original punk bands, The Damnedwere the very first British band to release a punk single (their mighty debut “New Rose”, released on 22nd October 1976), the first to release an album (1977’s ‘Damned Damned Damned’) and also the first to tour America. From the very first moment they started playing live in tiny punk clubs in 1976, The Damned quickly gained a reputation as a band who would always deliver an accomplished live set.

To cap their incredible 40th Anniversary year, which has already seen the band play a memorable set at Coachella Festival, where The LA Times raved; “The Damned’s no-future UK punk thrash sounded gritty and immediate” andRolling Stone claimed their set as ‘One Of The “20 Best Things We Saw” and also deliver a blistering three-hour show at a completely sold-out London Royal Albert Hall in the summer, The Damned will play across the UK this winter on dates listed below where they will be playing their legendary debut album ‘Damned Damned Damned’ in full, plus a career-spanning retrospective set.

The band are currently recording a new studio album, with exclusive merchandise and experiences available to pre-order now via Pledge Music –http://www.pledgemusic.com/projects/the-damned-new-album.

Following a new film documentary on The Damned, ‘Don’t You Wish That We Were Dead’, directed by Wes Orshoski (Lemmy), released in 2015 to much acclaim, BMG Music will release a new 40th anniversary ‘Art Of The Album’ CD, digital & heavyweight vinyl LP special-edition of the band’s classic debut album,‘Damned Damned Damned,’ complete with extensive new sleeve notes, in February 2017.

Always unforgettable, The Damned continue to wave the flag for originality, stick two fingers up to mediocrity and celebrate a DIY punk ethos in the face of plastic entertainment and scripted reality. Original members David Vanian andCaptain Sensible never expected to still be doing it 40 years later, but here they are in town for one night only, as their loyal following will attest, all simply because they are still an incredible live band who sound as fresh and exciting as they did way back in 1976.

See The Damned live through November and December on the dates below. Tickets are on sale now at – http://www.officialdamned.com/tour/.