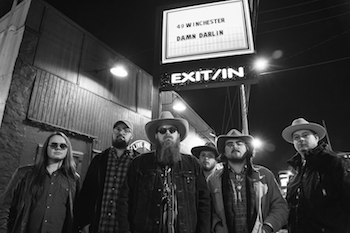 49 Winchester have released their brand new track, “Damn Darlin’,” which is available to stream/download worldwide now.

“Damn Darlin'” features on 49 Winchester’s upcoming new album Fortune Favors The Bold, which will be released on May 13th, 2022 via New West Records. The 10-track set was co-produced by the band and Stewart Myers (O.A.R., The Infamous Stringdusters) with additional recording & production by Kenny Miles (Wayne Graham). Rolling Stone Country has praised 49 Winchester’s live performance while Whiskey Riff called the band “….one of the greatest up and coming country music acts out there right now.” 49 Winchester’s New West Records debut follows their acclaimed 2020 self-released III, which American Songwriter named “…a confident collection that gives voice to the band’s pure, unfettered intents” while Americana Highways called frontman Isaac Gibson’s songwriting “Unforgettable,” saying, “…together they are distinctly and proudly Appalachian — carrying on and reinventing the musical traditions of their region with a sound that is wholly and distinctively their own.”

On Friday (15th April), to accompany the release of the track, the legendary Nashville live music venue, EXIT/IN, premiered the band’s official music video for “Damn Darlin’,” which can be watched here. Filmed on location at the Exit/In, alongside various other Nashville locations, 49 Winchester frontman Isaac Gibson said “There is something about the Exit/In that feels like hallowed ground. When you see the names on the wall, you know why. It’s a place that all my heroes have played. It’s a room I dreamed of playing for years as we were building what 49 is now. I feel like it’s sort of one of those beloved, rite of passage kind of venues, and that dark, gritty charm that it has made it perfect for the ‘Damn Darlin’ video.” Exit/In owner Chris Cobb said, “Every so often, a band comes around that not only makes and performs great music, but are an immediate friend of the club. 49 Winchester are without a doubt one of those bands and it is Exit/In’s distinct pleasure to be part of their journey. This is a record you want to own and a band you want to see live, now!”

Exit/In has stood at 2208 Elliston Place since 1971. As the anchor of Elliston Place, it earned the strip the well-deserved moniker, “The Rock Block,” now made official with a historic marker in place. Exit/In is a local, independent live music venue—family-owned and operated—and its history and cultural importance cannot be overstated. Its exterior Wall Of Fame and murals of musicians only hint at the deep history within the walls of the storied club. Celebrating 50 years as one of America’s independent music venues, Exit/In has featured tens of thousands of live shows, with performances by Chuck Berry, Johnny Cash, R.E.M., Muddy Waters, The Red Hot Chili Peppers, Jimmy Buffett, Etta James, Talking Heads, Willie Nelson, Leonard Cohen, The Allman Brothers Band, Billy Joel, Neil Young and many more. With this incredible history, the venue is dedicated to honouring its past as they continue to move forward, cherishing and nurturing local live music ecosystems. Exit/In: 50 Years, a commemorative book celebrating the venue’s rich legacy was recently released. The book tells the history of one of Nashville’s most important cultural institutions through a well-researched narrative text and never-before-seen photographs of the shows and people who made the venue legendary.