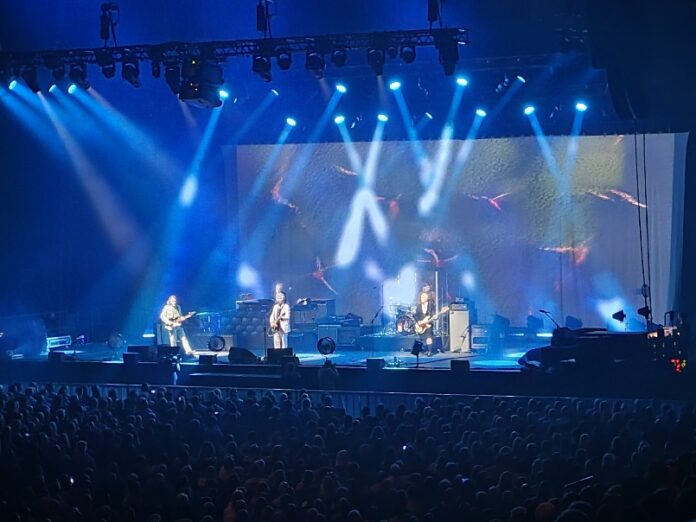 Crowded House are  – roughly – two thirds of the way through their set here tonight, when it happens.

“It” in case you are wondering is what occurs at nearly every arena gig. The gear change. This particular one sees the band play “Four Seasons in One Day” – to be fair to them, it is little short of sensational.

Crowded House have a truckload of massive hit singles (you don’t sell 15 million records by mistake, after all) and they follow up “…Day” with “Weather With You”. And the sizable crowd, as one, stands.

It had been, up to this point, an all-seated show, almost low-key. As warm as the summer evening outside, and punctuated by some wonderful songs, but it hadn’t felt like an arena rock gig. In that moment, it did.

The concept of “shared experience” has, after all, largely disappeared from recorded music in these days of personal playlists and Spotify algorithms choosing what you “might” like, and the only way to get that is at these gigs.

From the once a year concert goer to the seasoned watcher, they are all here, so are those songs.

Rewind an hour or so and three of the Finn family, Nick Seymour and Mitchell Froom (he’d long been the producer of the band and is playing keys) arrive to little fanfare or bombast. “Distant Sun” suits the relaxed vibe too, almost floating around to the thousands of people is a skill in itself.

Neil Finn’s sons Liam and Elroy are in the band these days, the former producing some lovely harmony on “To The Island” (one of a smattering of tracks they play from their 2021 “Dreamers Are Waiting” record, and it’s fitted in well. It has the timeless quality as the almost perfect pop of “World Where You Live”.

The fact that this is a much less choreographed show than most arena rock gigs is perhaps best underlined by the fact that “Mean To Me” is played after a request from the audience.

The newer songs have plenty of room to breathe, “Playing With Fire” is another that impresses, but it must be said that most of the crowd are here for the hits. They get them, “Not The Girl You Think You Are” is gorgeous, for sure, but they get a lot more besides. “Playing With Fire” is perhaps an unexpected highlight, starting with acoustics and exploding with a solo that Liam Finn rips from nowhere.

Credit to them for finding something new to say. “Private Universe” takes on new life here, it seems, and “I Got You” (one of the best loved from Neil Finn’s Split Enz) is a window in to the nu-wave world, and it sounds fresh still.

Which brings us back to where we came in, almost, and after “Weather….” There’s still room for another mega smash to complete a hat-trick, and “Don’t Dream It’s Over” is from the very top draw.

They leave with as little fanfare as they came in with after “Whatever You Want” and “Something So Strong”. but there’s an encore that essentially continues where they left off. “It’s Only Natural” has lost none of its power in 30 years, “Love Isn’t Hard At All” is the new records central tenet and “Better Be Home Soon” does the closing thing with an appropriate lack of fireworks.

Neil Finn is often seen in Fleetwood Mac these days and makes a joke of it when he says: “I see the Rolling Stones have had to cancel in Amsterdam tonight. I found out when I got the call today asking me to replace Mick. Apparently I am the guy you call these days……”.

His next line is more important: “I said ‘no, I have a Crowded House gig in Birmingham tonight’”. He did, and after a two year wait it was worth it. Moreover, this band, his band, is surely the place where he belongs.