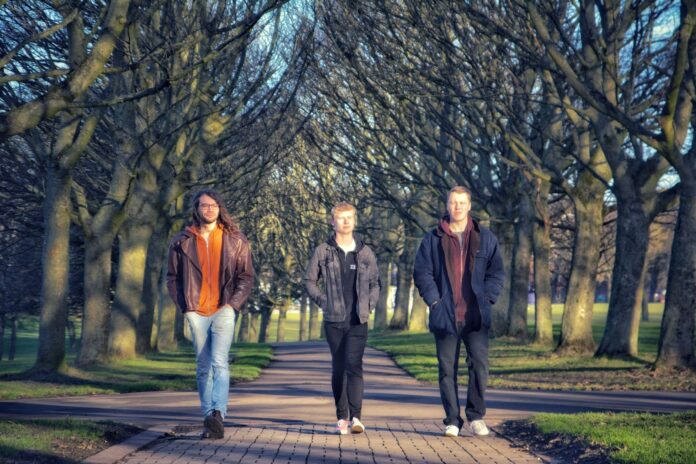 Leeds indie psyche trio THE CALLS have announced their SETTING SUN EP will be released via all usual platforms on 4 November and will be launched with a special night at LEEDS 360 CLUB at the Lending Room the following week on 11 November, with support from High Windows, My Nose Is Pierced and Hobbies. Tickets available from: https://www.skiddle.com/e/36164087

SETTING SUN is the third EP from THE CALLS, following The Night The World Stood Still in 2018 which first signaled their chameleon-like ability to change purpose and direction; and Fall Inside Again in 2020 which amplified their strength of always being strikingly unpredictable.

As songwriter and vocalist Tom Fuller – a man whose idiosyncratic approach to lyrics has always remained a constant – explains, SETTING SUN continues that process of forever changing: “We wanted to create a different world to the last EP, one that was brighter, warmer and more optimistic than our previous work. We introduced more electronic sounds, synths and drum loops and I think this adds to the mysterious sound of the record as it’s neither a guitar record nor an electronic record. Lyrically, I intended it to be quite hopeful in a time when hope is scarce, and I’d like to think this comes through.”

Hailing from the thriving musical bedrock of Leeds, THE CALLS remain a proudly defiant DIY band who write, rehearse and record their music in a converted barn. The trio are driven by the unconventional songwriting of Tom Fuller, who puts an introspective slant on social observations through cryptic wordplay and metaphor, with lyrics often dystopian in their outlook, often reflective and always deeply personal. He’s joined by lead guitarist Will Johnson, a film maker and visual artist whose unrestrained and unusual sound is perhaps due to the fact that he had never picked up a guitar before joining the band; and bassist Marcell Haslewood, a lifeguard who navigates their sound via a combination of ambience and dub and a unique approach to playing that defies convention.

This unflappable versatility to move through dark, psychedelic dub-rock, to bold, inventive percussion and soaring rhythms is one of their greatest assets; one that continues to woo an array of artists from many fields, the latest, in typically abstract fashion, being fellow Leeds native Josh Warrington, the current world featherweight boxing champion, who can often be seen training in the band’s T-shirts.