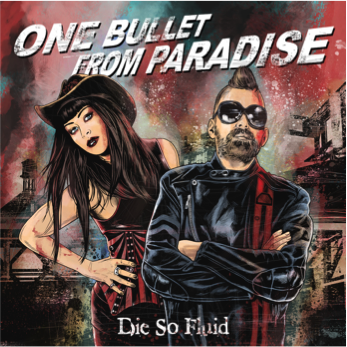 After a year of turmoil and tragedy in 2016 – which saw the sudden and unexpected death of their beloved friend & drummer Al Fletcher – the remaining 2 band members Grog & Mr Drew stepped back to contemplate not only the meaning of life; but the meaning of their band, their music and their future.

Al had been a huge part of Die So Fluid’s sound. He’d won a Grammy for his drumming and his finesse, thunder, power, enthusiasm & creativity always enhanced the band’s rough, tough, soaring, bittersweet rock songs.

At the time of his death Grog and Mr Drew had written a bunch of songs for the album but nothing had been recorded. After a period of reflection they went back to the drawing board. They had a lot more to say.
They wrote new songs. No holds barred. Harder, heavier, faster, punkier. No filler. No fat. No fucking around. Life is short. Why wait for tomorrow.

‘You could sleepwalk all your life
And never learn how to run
Don’t say tomorrow.
Tomorrow doesn’t always come’

They asked their friend Justin Bennett (Skinny Puppy, My Life With The Thrill Kill Kult) to play drums on the album. Grog recorded bass & vocals in LA, Mr Drew recorded guitars, synths, loops and noises in London and Justin recorded the drums in Bologna, Italy.

One Bullet From Paradise contains 11 incendiary new songs. It was produced by Mr Drew and mixed by Justin Bennett & Mr Drew himself.

Original artwork has been drawn for the album by renowned graphic novelist, artist & film-director Dan Schaffer. Think Walking Dead meets Mad Max. The imagery perfectly encapsulates the attitude of the music and the knowing of the lyrics.  From the social commentary of HumanUNkind, Were We Born To Kill Each Other and One Bullet From Paradise. Through to affairs of the heart in No More Stars, Farewelland Uncomplicated. From affairs of the mind in Terrible Thing. To the call to arms of Skeleton Suit, Bittersweet and Manifest

A limited edition version of the album will include a previously unavailable live album recorded in Tempe Arizona featuring Grog, Mr Drew and Al. The album entitled ‘Draw a Line and Cross It – Live in Arizona’ showcases the band in full flight, full sound and full glorious technicolour.  It’s existential, Baby!

“One Bullet From Paradise” is released through Strataville on the 30th March 2018.