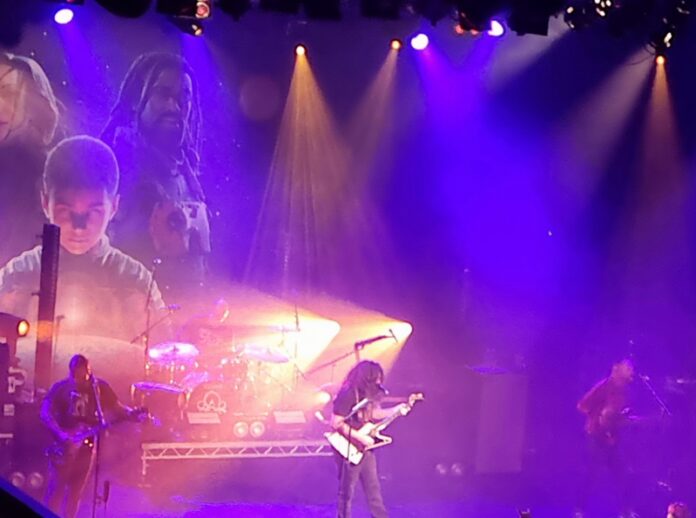 The other day, as they landed in the UK for this jaunt, Coheed and Cambria drummer Josh Eppard tweeted: “I remember playing with Thrice when we were kids and thinking “Jesus, bands can be THIS good?……Thrice is one of the best to do it. Ever”.

Watching them here, for the first time, its clear that they are special. Never changing line up in over 20 years sets them apart and speaks to their chemistry. Their set speaks to their skill. A focus on the present  – opener “The Color Of The Sky”  is one of a few from their most recent record “Horizons/East” – but also acutely aware of their history. They are, as singer Dustin Kensrue notes: “celebrating an anniversary”. 20 years since their breakthrough album, “The Illusion Of Safety” and you can chart their changes through the set. The pair of “…..Safety” tunes they play, “Where Idols Once Stood” and “The Red Death” are noticeably more raw and vicious than the rest. Different, even than the other song they play from roughly that era, “The Artist In The Ambulance”, which is a visceral rocker with the lightshow to match.

Mostly, though, Thrice, are an exercise in intensity. There’s little in the way of excess, anywhere. Instead “Dandelion Wine” and the likes lock into a groove and are happy to lurk to get under your skin. “Robot Soft Exorcism” is prog and it is a world away from those early songs. And they are proof that you don’t need flash to engage. It’s noticeable just how many fans they have in the huge crowd – “Black Honey” played early in the set, is chanted by the audience for example – but there’s no bombast, no chest-thumping, instead “Beyond The Pines” beguiles and “The Earth Will Shake” waits before delivering its blow.

Thrice, then. The band that no-one, really, can pin down, were at their mercurial best here.

Coheed And Cambria’s Claudio Sanchez has just finished “The Liars Club”. It’s one of a clutch of songs that they’ve played from their new album: “Vaxis – Act II: A Window of the Waking Mind”. He steps to the microphone and says: “Birmingham, thank you. It means so much to us to come halfway across the world and play these new songs and have them received like this.”

There’s a few things to unpack here. 1) he’s right. They have gone down brilliantly 2)They are incredible songs, but 3) the love for Coheed in this room here is such that they basically could have played anything from their canon and have it treated like this.

A co-headliner, but in the UK at least, do not doubt that C&C are the closing act. They arrive with a couple from 2018’s “Vaxis – Act I: The Unheavenly Creatures” (and the “Dark Sentencer” is wonderful) but tonight is mostly about the new. Released in June “Act II” was, I wrote on this site: “arguably their best and most challenging”. You get the full gambit of that here. “Shoulders” is sensational, the disco “Disappearing Act” is better still, but somewhere in between them is “Beautiful Losers” and if this band had a signature tune, I am saying its that one. A group that writes concept albums (nine of them at last count) with impenetrable storylines, yet who is capable of getting 3000 people to get fists in the air and roar the choruses without prompting. It’s a mighty thing.

Yet, you watch Sanchez and Travis Stever, partners in crime for almost 30 years and you can see them with a childlike enthusiasm for the mad, mad world they’ve created. Sanchez dons a double-necked guitar for a rip through the metal “A Favor House Atlantic” and the reaction of the audience genuinely astounds. It’s clear, in that moment that the people here, mostly don’t just love this band, they live this band and that’s a subtle, but crucial difference.

They pop back to the early days for “Welcome Home” before the 2022 version rips through the last song on the album “Window of the Waking Mind” and all its myriad parts, as if to underline that if they wanted, they could have been a heavy Yes (I’ve always had this theory).

There’s an encore. “The Running Free” is both another singalong, and an expertly delivered piece of music that recalls many but sounds like none. And you have to remind yourself that they’ve always been this good. Every time.

Indeed, the last time I saw them I said “If Coheed And Cambria are ready for the big leagues, then this is no more and no less than their promotion party.” Fast forward four years and I am more certain than ever that this is the next arena rock band. Calling someone “unique” has been so overdone the word has lost its meaning. So instead, try this: for an hour and a bit tonight, Coheed and Cambria delivered a set that no one else could have even attempted, never mind pulled off.