COC Clean Their Wounds At Desertfest 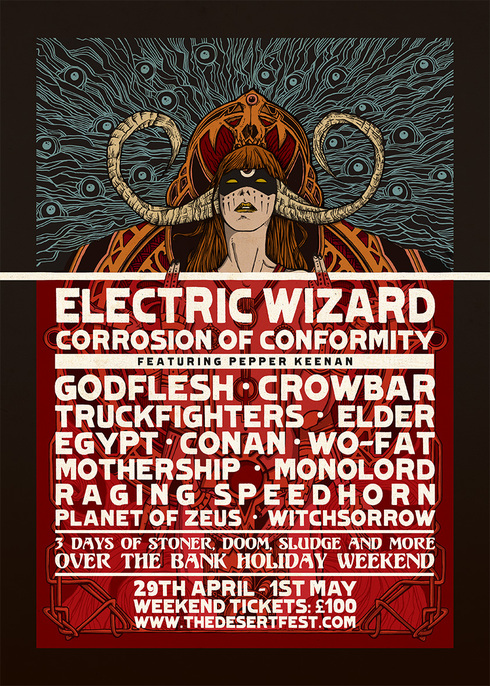 The second headliner to walk the DESERTFEST LONDON stage next April 29th in Camden are awesome, with America’s coolest volume dealers CORROSION OF CONFORMITY and no one but their historical frontman Pepper Keenan at the helm! Icing on this greasy cake: their sludgy brothers in arms CROWBAR will co-headline the night, for a “southern special” Friday at Desertfest!

UK’s forerunner stoner/doom/psyche gathering DESERTFEST couldn’t reach the milestone of their 5th edition without having cult acts on the bill. And who could open this special weekend better than one of America’s most inspiring and outstanding bands of musicians in heavy music, CORROSION OF CONFORMITY, reuniting with their iconic guitarist and frontman Pepper Keenan (also well-known for founding leading southern metal unit Down). With the recent news of COC’s signing on Nuclear Blast Records and recording of a new album due out in the fall of 2016, there is no doubt that this fifth Desertfest London will go down in history!
As previously announced and to make it even more special, NOLA’s sludge metal heroes CROWBAR will co-headline the Friday along with COC, bringing their influential slow-and-low sound to the masses. Once again this is a first, as Kirk Windstein and his crew of titans have never played any Desertfest before. A night dedicated to US sludge and rock heavyweights!
– DESERTFEST LONDON 2016 –
April 29th to May 1st in Camden, London (UK)
Weekend tickets available AT THIS LOCATION
Current lineup is as follows:
ELECTRIC WIZARD
CORROSION OF CONFORMITY w/ Pepper Keenan
GODFLESH
CROWBAR
TRUCKFIGHTERS
ELDER
EGYPT
CONAN
WO FAT
MOTHERSHIP
MONOLORD
ROTOR
RAGING SPEEDHORN
PLANET OF ZEUS
WITCHSORROW
Get more infos on the Desertfest website
Follow the festival on Facebook, Twitter and Instagram
Previous article
Your Funeral Is Ready Now
Next article
Walter Gives Back