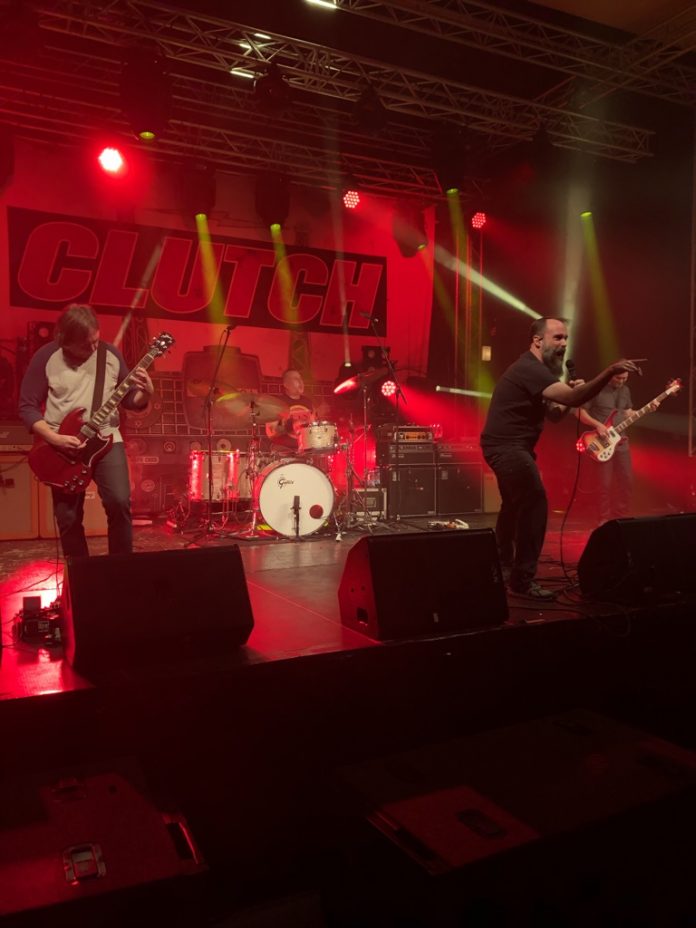 Just over a year ago, ahead of Clutch’s Christmas dates in the UK, I saw them play in Amsterdam and declared them the best band in the world. Since then they have toured throughout the past year in support of the ‘Book Of Bad Decisions’ album and the four download only releases from their ‘Vault’ series. More new music and touring has seen their popularity continue to grow and it was pleasing to see a fair few younger faces turning out on a cold night in Germany. It can’t be much longer before Clutch could command bigger venues than the compact Lowensaal but in many ways I hope they don’t, as the atmosphere in this space was terrific. Also the accessibility to be able to get up close with a band of this stature is one of life’s great musical pleasures and tonight’s show was no exception to that.

A word though for the support bands that played first. Yet again Clutch brought along two great bands that they have had a long-term relationship with. Openers Kamchatka have been around a while and this showed during their brief but energetic set in support of their new album, ‘Hoodoo Lightning’. They went down really well with the crowd and they are a band that I shall be investigating further.

Like Kamchatka, Graveyard are also from Sweden and they were next up. They played a longer set which gave them a chance to musically stretch out a bit but I found their sound mix to be a bit awry, with the kick drum and bass guitar appearing to dominate over everything else. They played a selection of slower songs that needed listening to and I found it difficult to really enjoy with the bass heavy mix. However they were also well received, though perhaps with a little less enthusiasm than the punchy Kamchatka.

Chuck Brown’s ‘We Need Some Money’ announced the arrival of the headliners and the start of a set list that really was for the Clutch connoisseur, as it avoided some of the ‘hits’ for some of the album tracks old and new that perhaps don’t get so much attention.

‘Promoter Of Earthbound Causes’, from the might Blast Tyrant opened the set and was followed by the first release from the vault series, ‘Evil’. Whilst a cover, it just sounds like it’s been a Clutch song for years and it contained the first of many great guitar moments that evening.

A majestic performance of ‘Big News 1 & 2’ followed, matched by ‘A Quick Death In Texas’ from the Psychic Warfare’ album and ‘Red Horse Rainbow’ from the much underrated ‘Pure Rock Fury’.

Those newer fans expecting the ‘hits’ may have been hoping for some newer material and when this came, it was not the obvious selections. ‘Sonic Counsellor’ and ‘Emily Dickenson’ are both off the last album but tend to get overlooked a little bit – they shouldn’t be as both sounded great.

Next up was a trio of old songs that seemed to lift the performance and the crowd to another level. I’ve never heard ‘Slow Hole To China’ played live but it was full of aggression and was followed perfectly by ‘A Shotgun Called Marcus’, the first song from their first album from way back in 1993. These were both eclipsed though by a fiery version of ‘I Have The Body Of John Wilkes Booth’. These three songs were a reminder of just how hardcore Clutch could be back in the day.

The next song was also a new live one for me, as the cover of ZZ Top’s ‘Precious & Grace’ was only recently released. I’m also a huge ZZ Top fan and it’s Clutch are as well, as this is a really discerning choice of track. It’s another that suits the band well and Tim Sult really nailed the guitar solo.

‘Profits Of Doom’ is a stone-cold Clutch classic that the crowd lapped up and then came another selection from the last album. ‘Lorelei’ sounds great within the context of the album but tonight it sounded like a whole different song, with a real blues crunch to it and it was my surprise of the night.

Kamchatka’s Per Wilberg then joined the band on stage and with the availability of keyboards, we were treated to a rare performance of ‘10001110101’. I’ve always thoughts this was one of Clutch’s ‘greatest hits’ and the added power given to the overall sound by the keyboards was superb. A great way to close the set proper but then came an encore that I would imagine most there are still talking about.

‘Electric Worry’ has developed a life of its own and is probably Clutch’s biggest song these days. It never disappoints and tonight was no exception judging by the crowd reaction. However before breath could be drawn at its conclusion, JP launched into the latest release, an absolutely crushing version of CCR’s ‘Fortunate Son’. I’ve always thought this was John Fogerty’s finest hour; written in times of tumultuous political change and sung with real anger, I believe it has the same relevance now and Neil Fallon’s delivery is perfect for maintaining that anger. All I can say is that Clutch done justice to one of rock’s greatest songs.

Over the course of four night’s in Germany. Clutch played 62 different songs. I always enjoy the fact that I don’t know what is coming and every time I leave the concert with similar emotions. There is always one track I was hoping to hear but didn’t – ‘Immortal’ since you ask, as I don’t think I’ve ever heard it played live. There will be another track that I’ve heard loads but the version that night finally caused the penny to drop; this time it was ‘John Wilkes Booth’, which was just so aggressive and heavy. Finally, there will be another track which I’d heard before and liked but thought the performance on the night turned it into something else; that one goes to “Lorelei’.

I’d also like to doff my cap to whoever did Clutch’s sound on the night – the mix was perfect and I was able to enjoy all the individual performances as well as the combination of all four, all without worrying about damaging my hearing!

So there you have it; they are still the best band in the world right now for me and the UK has the opportunity to see it first hand when they arrive for four dates next week. Anyone who wants to see the best band in contemporary rock should already have their ticket.