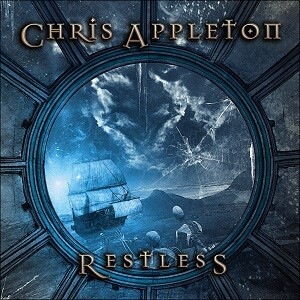 Absolva man gets bored so makes a brilliant acoustic record

So you are in a band. You are on tour. You travel from place to place. Then it ends. You come home.

Well, if you read books by Slash or Motley Crüe, you take a shit load of drugs and then go and make another record, but this is the real world. You’ve only got one option. You make a solo record, don’t you?

That’s what you do if you are Chris Appleton anyway. When he’s not fronting the wonderful Absolva, or backing Blaze Bayley, Chris doesn’t like being bored. Which is where “Restless” comes in.

Finding himself with nothing to do, Appleton flew to Belgium, where he hooked up with his friend Wizz Wizzard and made this brilliant little gem.

It should come as no surprise that the playing here is wonderful. MVM can still vividly recall seeing Appleton for the first time, something approaching a decade ago, he played the solo to a song called “Death By Lightening” (by his first band Fury UK) and collective jaws dropped. What is perhaps a little unexpected is just how good “Restless” is. In lesser hands it could amount to a ragbag collection, here it is anything but.

Opening with the folky “Seafarer” it is superior storytelling, the bluesy romp of “Crazyhead” lightens the mood, and “No Tomorrow,”  is a fast paced song that sounds like Iron Maiden would if they did this record.

Arguably though, the best song of all is the instrumental title track. The playing here is incredible, and it brings to mind Satriani in places and the piano led “Wonders Of The World” breaks new artistic ground.

Elsewhere there’s a couple of reinterpretations of his own songs. “Only When It’s Over” originally appeared on the debut Absolva record and is stripped bare to just raw emotion, while “I See Red” from Fury UK’s output is remade as a kind of acoustic song which simmers with anger.

“Restless” finishes with a cover, as Ozzy’s “Mama, I’m Coming Home” is given a heartfelt makeover and you get the feeling that everyone involved in this project thoroughly enjoyed the experience.

Chris Appleton has – in many ways – been Britain’s best kept rock secret for far too long. Here, he proves just way he’s so vital.