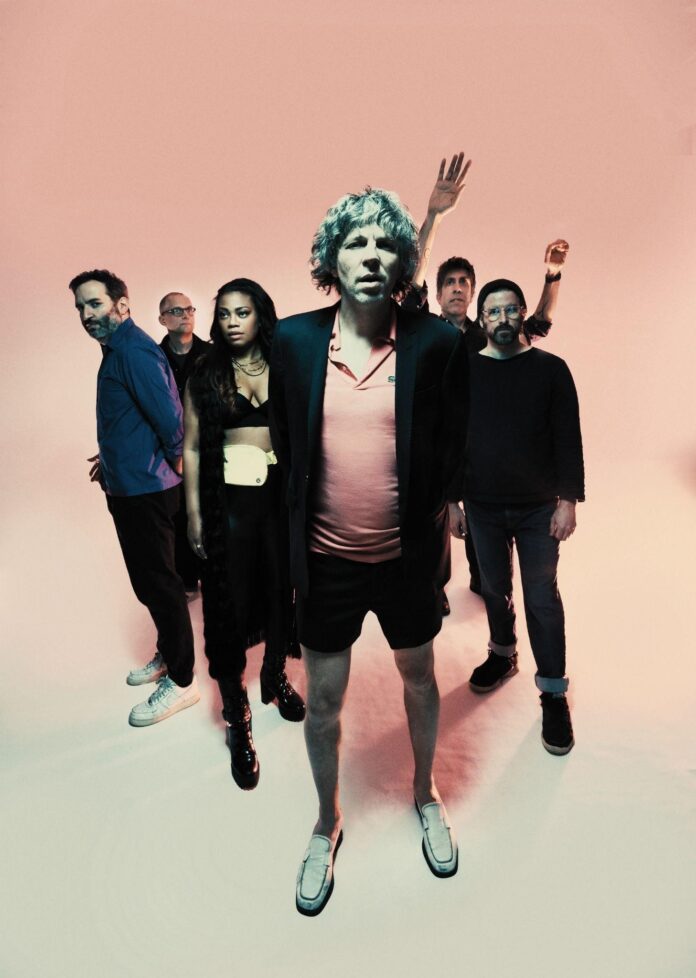 Fresh from releasing their ninth studio album, Let It Be Blue, New York dance-punks and Warp Records mainstay !!! have released a new video for A LITTLE BIT (MORE) from the album to coincide with their current UK tour. Watch the video here: https://www.youtube.com/watch?v=fNECSfw28bQ

There’s this thing about art where in order to make it feel exciting for yourself, you have to reinvent yourself each time. You have to keep pushing. Go at it like a beginner. Take a white wall and colour it in. Every new thing you make has to feel like a statement, the best new version of yourself. Dance punk New York royals !!! know the feeling well – they’ve been releasing urgent, obliterative, F-U music for 25 years. For !!! music is a place where anything can happen. To quote Nic Offer, “We’ve always been pushing towards something stranger and weirder; we had to keep pushing on”.

LET IT BE BLUE takes that feeling of constant, radical transformation to new, untapped zones. It’s a record of sparse dance music. The kind of stuff you want to put on loud, let loose, go to the bar and get a drink, only to abandon your plans because the song that just came on was too good not to dance to.

It’s a computer record but it doesn’t feel like it. Featuring production from Patrick Ford, it is the product of file sharing, trading stems, song particles, little ideas on their way to being fully realised dance tracks. It was conceived during the past two years, with dreams of future dancefloors very much on the brain. The resulting eleven songs are some of the band’s most production-focused offerings to date. They’re crystalline, full of sub-bass and drums. It evokes visions of clubs where a concoction of Dembow and acid house play at volumes so loud your ears hurt and you forget what day of the week it is. In other words, it’s a !!! album. It makes you freak out a little bit.

Making something sparse was an exciting challenge for the band. “Starting as a band with seven or eight people, we were always crowding everything in and trying to fit as many parts in as possible,” says Offer. LET IT BE BLUE is a departure from that. It’s minimalist but that doesn’t at all mean these songs aren’t complicated, self-contained worlds. They are.

The record’s cast of collaborators are another !!! signature, another way for the band to feel constantly excited about the discovery process that is making new work. This shift has been in the works for a decade. It started on THR!!!ER, a record that you might consider a turning point in the band’s expansive discography.

In that past decade, the band has collaborated with an exciting rotation of artists. On this record, that desire to experiment alongside other artists feels especially realised. They feel equally distinct. When Angelica Garcia hops on vocals on Un Puente, the scenery changes again. We’re not in the New York City lofts of yore, we’re on a goddam beach, pupils dilated, bouncing from high BPM.

LET IT BE BLUE is a record about discovery, uncovering new parts of yourself. Going there. How many dance records start off with an acoustic track? LET IT BE BLUE does. It’s called Normal People. It’s tongue in cheek, it’s like walking, taking a first step in a new place before everything changes in weird and excellent ways. It’s kind of like a Pandora’s Box. Open it up, the whole world shifts and transforms around you. Mostly, though, it will make you really want to get down and dance.