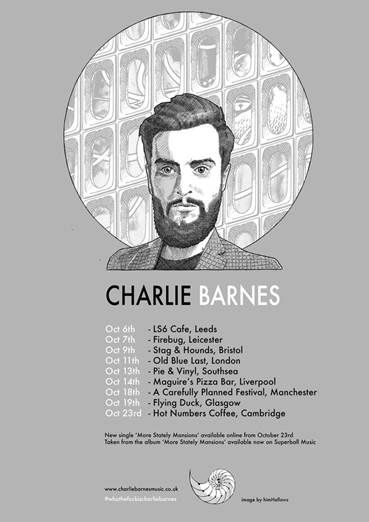 But he’s going to his nan’s for tea

Talented singer & multi-instrumentalist Charlie Barnes released his debut album ‘More Stately Mansions’ earlier this year, and is set to release a reworked version of the title track as a new single on the 23rd October 2015. He also recently announced some UK tour dates and has just added some additional shows. You can find the full list below:

Charlie had this to say on the dates:

“I’m very excited for the upcoming solo dates, although I’m also reasonably terrified; it’s been donkey’s years since I’ve been onstage alone doing the looping thing.  I’ve come up with a new version of the solo set so it should be a little bit different for anybody who’s seen me play on my own before.  I’m looking forward to getting back to the old days of carting all of my gear around on the train on my own and sleeping on the sofas of various kindly friends.  Thankfully I’ve granted myself a day off or two so I can swing by my Nan’s house for some home-cooked food.  I’m in my mid-to-late twenties now, so I can’t live for two weeks on M&S wraps and salads like I used to…”

Charlie was also recently announced as a touring member of English indie-pop band Bastille, and was seen on festival stages throughout Summer including Glastonbury, Reading & Leeds, Rock Am Ring & many more.