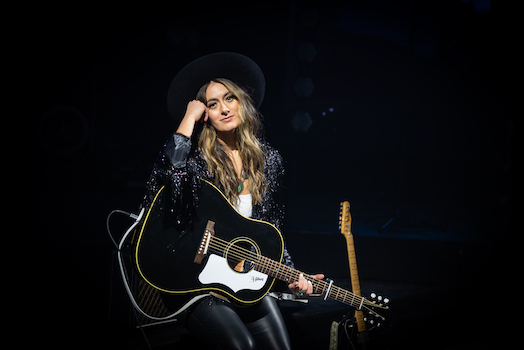 US singer-songwriter Alyssa Bonagura has shared a live performance video of her single ‘Warrior,’ first released in 2012 off her album ‘Love Hard’ in support of Pancreatic Cancer Awareness Month – November. The video is available to view here.

Filmed in the summer of 2020, Alyssa returned to Liverpool to reconnect with a group of musicians and bring them together to film a twelve-song live set. Adlib, a leading event company, built a full-scale live set in their Liverpool studio, and filmed and produced the performance. The performance of ‘Warrior’ was filmed in honour of the Seena Magowitz Foundation.

Pancreatic Cancer Research is a cause close to Alyssa’s heart, having lost one of her friends to the disease. As Alyssa comments, “this song was written for a very dear friend of mine, Nikki Mitchell, who was battling pancreatic cancer when we met. She was the kind of person that never let anything stop her from living a full life and even with this disease she did just that. In my eyes, she was the ultimate warrior. I hope this song can be an encouraging message to those who are battling cancer.”

Alyssa most recently released ‘New Wings (Acoustic)‘ and will share more new music in the months to come.