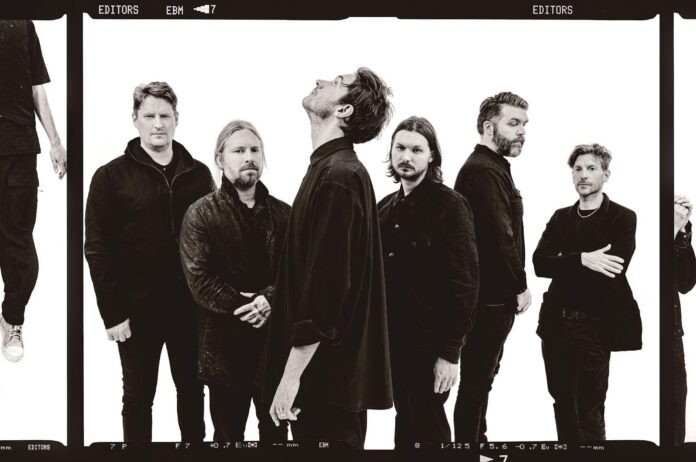 On the day they kick off their 7 date UK tour, Editors today announce a brand new remix of their single ‘Vibe’ from British electronic duo The KVB, out now via Play It Again Sam. Stream here.

The KVB stamp their own ambient music style on Editors’ hedonistic and upbeat single, taken from their recently released seventh studio album EBM, adding a electrifying dimension whilst retaining the original’s pop sensibilities.

Tonight the six piece play the first of 7 live shows in the UK and Ireland at Nottingham’s Rock City. As well as remixing ‘Vibe’, The KVB will be supporting Editors on tour in support of their recent album Unity (Invada Records), starting tonight and followed by performances in Cambridge, Manchester, Glasgow, Dublin and Bristol. Tickets are on sale here.

A band who have never stood still creatively, EBM is a breathlessly heavy step up and Editors’ most leftfield material yet – a thrilling, unrelenting thrust of full-bodied electro-industrial rock. It is the first with new band member Benjamin John Power, aka Ivor Novello winning producer and composer Blanck Mass. The album title is an acronym of Editors and Blanck Mass but also a knowing reference to Electronic Body Music, the potent sound that originated in the 1980s and which has hugely influenced Editors’ new material, where the synths of bands like Nitzer Ebb, Front 242 and DAF hammer darkly amongst smoke machines, strobe lights and the smell of leather.

EBM kicked off the next era of one of the UK’s most intriguing and enduring musical success stories. All 7 of Editors’ studio albums over their 17 year career have charted in the UK top 10, with 2 scoring number 1’s, and their debut, The Back Room, being shortlisted for the Mercury Prize. Their latest tour saw them play their biggest UK headline show to date at OVO Arena, Wembley in 2020, signalling their ever-growing audience. Their successes have been just as impressive across the channel, regularly selling out tours and headlining festivals throughout Europe and beyond, as the below European Tour dates highlight. Arguably the key to their longevity is their ability to consistently evolve their sound, whilst remaining uncompromising in their vision. This next chapter proves Editors are continuing the trend.

the course of the 2010s. Early releases such as 2012’s debut album, Always Then, dealt in brittle

measure, but the duo’s style became more streamlined and sharp-edged on later efforts such as

2018’s Only Now Forever, recorded in their Berlin apartment.