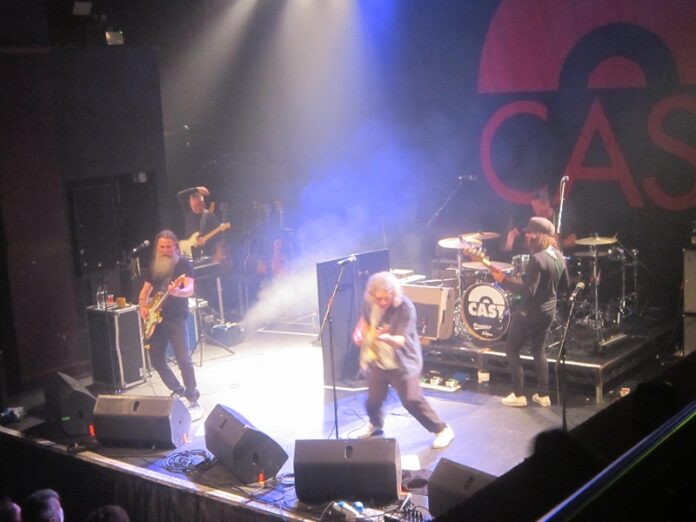 Indie rockers Cast arrived in Birmingham for what was billed as the `All Change 25th Anniversary Tour` which celebrates the anniversary of the band`s debut album, which as John Power shared during the gig is now really the 27th Anniversary due to the covid pandemic. Shows are falling by the wayside for many bands but this Liverpudlian quartet are made of sterner stuff and with strict precautions in place this was one of the few tours that`s proceeding. Cast were formed in 1992 by John Power and Peter Wilkinson after Power left The La’s and Wilkinson’s former band Shack had split. They shone brightly from 1992 – 2001 and then reformed in 2010 and the current line up now is John Power (vocals, guitar), Liam “Skin” Tyson (guitar), Jay Lewis (bass) and Keith O’Neill (drums).

Tonight, we enjoyed the `All Change` album in all it`s glory followed by an encore of what could be considered as `Greatest Hits`. Stealing a line from Eric Morecambe, the band plays all the songs but not necessarily in the order as on the album.  We kick of with the really melodic and captivating `Promised Land` and i`m sure we all have our favourites from this album but for me I love tracks like the powerful `Sandstorm`, `Fine Time` a quite introspective and reflective thoughtful number about appraising a difficult relationship, `Four Walls`, `History` which takes on another dimension live with Liam manipulating the frets of his guitar to give that expansive almost wah wah sounding texture and the song on which the show closed out the anthemic singalong `Alright`. I have to admit `Two Of A kind` was extraordinary with it becoming almost psychedelic towards the end and John breaking a string as he assaulted the guitar.

There`s a short recess before the guys are cheered back to the stage and share the dreamy `Magic Hour`, understated `Live The Dream`, heart breaking `I`m So Lonely`, toe tapping `Beat Mama` and `Flying`. A couple of my all-time favourite numbers close out the evening with `Guiding Star` which has to be one of the most underrated uplifting songs ever in my opinion and the blistering `Free Me` where Liam manages to blend a segment of  Neil Young`s `Like A Hurricane` into his guitar solo. As the last number progressed John left the stage followed by Liam leaving Jay and Keith to demonstrate their talents with a drum and bass faceoff and embracing each other as it concluded.

I must admit sometimes I feel a little underwhelmed as I leave a venue after a gig but not tonight. This ninety minute plus masterclass put a real spring in my step as I headed home on a bitterly cold winter night. We all have our favourite tracks and all the one`s I relish were shared tonight so what more could I ask. It was obvious from the band`s reaction that they were just happy to be back playing to a live audience and this is why we all love music. After tonight there are thirteen more gigs up and down the country on this tour.

What more encouragement do you need to attend one.