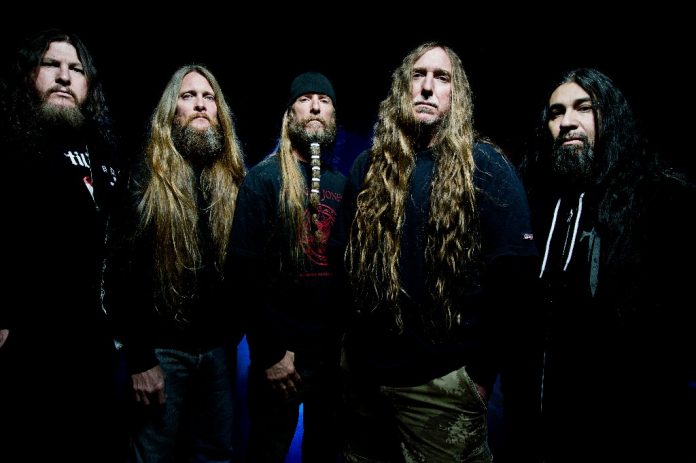 Today marks the official release of death metal legends OBITUARY‘s self-titled new album via Relapse Records. The album can be streamed in its entirety via Obituary‘s official Bandcamp page and all streaming services. In celebration of the release, the band has also shared an animated music video for “Ten Thousand Ways To Die” directed by Balázs Gróf who previously animated their video for “Violence”.

OBITUARY commented on the music video:

“We are so stoked about the new “Ten Thousand Ways To Die” Video. We knew even while making the “Violence” video from the Inked In Blood release that there would be a continuation video to follow. It just goes to show once again that this band is not afraid to have a good time and laugh at ourselves. Balázs is an amazing artist and captured the band’s characters and personalities perfectly in both videos and we are so excited to get the reaction from the Obituary fans.”

Additionally, OBITUARY kicks off the Decibel Magazine tour tonight with Kreator, Horrendous and Midnight. All confirmed tour dates are listed below.

An extensive feature on OBITUARY and their illustrious, almost 30 year history, was  recently featured on Rolling Stone.com. Read the full article now HERE. Furthermore, Noisey recently released a mini-documentary about the band which can be viewed at this location. A second mini-doc featuring commentary from members of The Black Dahlia Murder, Broken Hope, Kreator, Incantation, Exhumed, Toxic Holocaust and numerous other bands can be viewed HERE.

Obituary is out now on CD/LP/Digital. Physical and digital orders plus streams are available now at bit.ly/ObituaryST.