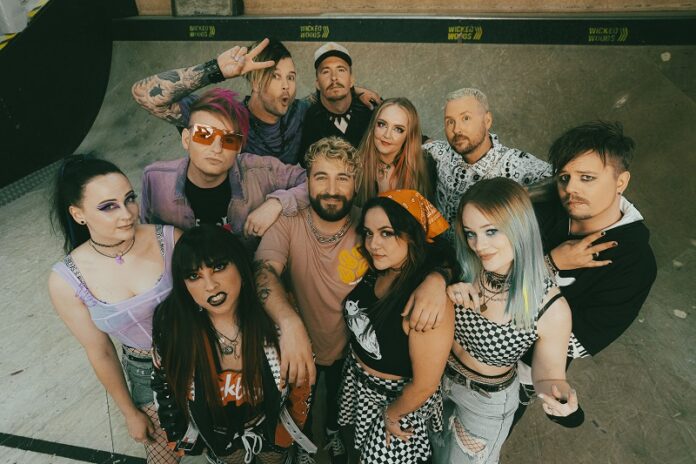 With “We Got The Moves”, “Pump It” and “Spaceman” Electric Callboy have already released three anthems that are loved and celebrated by the fans, each outperforming the last, as evidenced in over 35 million video views on YouTube. Electric Callboy are in a sphere of their own, with elaborately produced music videos showcasing their party-ready sound. With “Fuckboi”, Electric Callboy give a glimpse into the diversity of their sound, which stands out from the first three singles of “Tekkno”.

Between modern trap elements and driving alternative rock beats, “Fuckboi” builds on a catchy sound that proves to be a true hit even without the bombastic party factor. This time, Electric Callboy builds on an American pop punk vibe, complemented by a feature with Conquer Divide. The US five-piece gives “Fuckboi” a 2000s sound that falls somewhere between Avril Lavigne and Paramore, adding a skate punk influence to the Electric Callboy sound. In particular, it is the voice of singer Kia that lifts “Fuckboi” to another level in a duet and perfectly complements the voices of Nico Sallach and Kevin Ratajczak.

You can listen to the song here: https://electriccallboy.lnk.to/tekkno

Visually, Electric Callboy together with Conquer Divide build a setting that catapults us into the USA of the 2000s. With a high school musical vibe, Electric Callboy sketch the scenery of a skate hall loaded with good vibes. Once again, the video was realized by guitarist Pascal Schillo and his own production company, with captivating quality that has become a trademark of the band and its identity.
The Video will premiere July 8th at 5pm GMT: https://youtu.be/i5IlvWbjJIA

Their recent UK and EU headline run saw over 60,000 tickets sold, selling out almost every show, while “Pump It” and “Spaceman” both charted in the Top 35, putting them in the list of the most successful singles by a German metal band. “Pump It” also prevailed internationally at the Heavy Music Awards, edging out acts such as Bring Me The Horizon.

Electric Callboy are known for their ecstatic live shows. A live show that will be duly celebrated on a big arena tour in 2023 and will be supplemented by six more new songs and will attract more and more attention internationally. The new album “Tekkno will be released in September via Century Media.

They’ve also announced a special one off UK show at London’s Brixton Academy on 30th April 2023 with tickets going FAST – get yours HERE!You can preorder the album here: https://electriccallboy.lnk.to/tekkno