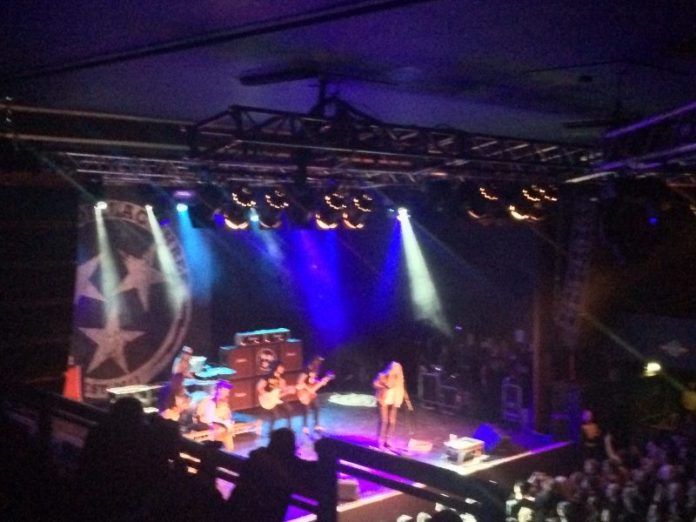 It’s all about the south

The term “fast rising” is bandied about with hyperbolic abandon, that said, it does seem the very definition of the phrase is Tyler Bryant and the Shakedown. just a few short months after impressing everybody with their performance at the Olympic Stadium with AC/DC they are back – and by the way they are in the midst of touring with Guns n Roses too. Their performance here is better than the one in June, given that they make the stage their own for 45 minutes, playing a brand of what is probably best described as blues rock, but with more rock than blues. “Criminal Imagination” looks for trouble, the incessant thump of “House Of Fire” finds it, while “The House That Jack Built” has a kind of early Aerosmith thing going on. Then there’s the bluesy ones. “Downtown Tonight” and the more swampy “Last One Leaving” with its neat segue into Elvis’ “That’s Alright Mama”. “But there’s a million bands doing this” goes the cry, and you know what? There are. But TBATS are the real deal simply because whatever it is they posses it. Lots of it, too. Caleb Crosby. the livewire drummer, comes stage front during the sprawling closer “Lipstick Wonder Woman” and beats the crap out of a single drum as though its the most normal thing in the world.  To The Shakedown it might be. Pair great songs with the playing skill and energetic presence of their frontman and we are close to answering why they are “fast rising”. Plenty of bands have left Nashville, Tennessee and headed out to the world. Here’s the next.

The Cadillac Three are close to making it very big indeed. They’ve tapped into the idea that there’s millions of people who haven’t ever been below the Mason Dixon line in their lives but are so in the thrall of “the South” that we lap up the tunes again and again. But like the openers, there’s something about TC3 that is undefinable, but has always been there since the moment they came to the UK. Even back then, supporting Eric Church – or like when MV saw them – opening for The Graveltones just for the hell of it, they were destined for the top.

Even if they’ve never quite harnessed the brilliant live shows onto record quite yet, on stage, basically on stage they are phenomenal. A lengthy set here (a number of the songs here are turned into jams) begins with a few from the new “Bury Me In My Boots” record. The title track sounds mighty, but even the more throwaway ones (and it had just a few too many to be the classic that was hoped for) translate well. “Soundtrack To A Sixpack” is a party tonight, while “Graffiti” has a kind of laid back Bruce Springsteen feel.

They are superb largely because their singer/guiarist Jaren Johnston is superb. A brilliant songwriter (he pens country number ones for fun outside of his work in TC3) struts, preens, does kneeslides, plays guitar like he was born to and still has the demeanour of the most Southern of Gentleman. At one point here he sings “Running Red Lights” solo and dedicates it to his wife, who is standing at the side of the stage with assorted roadies and guests. It should be cloying and sentimental. It isn’t.

The songs from their debut album are still magnificent. “Back It Up” is a real favourite, “Down To The River” becomes a singalong, and “I’m Southern” and “Days Of Gold – used to end the set – are classic southern rock.

The encore is simply great fun. “Honey Bee” by Tom Petty sees the two bands onstage together, “White Lightning” is gorgeous balladry, but its “The South” that shows you that the UK’s relationship with the deep south of America is no knee trembler of infatuation but a full blown courtship. “This is where I was born and this is where I’ll die” sing a couple of thousand brummies. We’ll presume they don’t mean in this concrete box surrounded by a dual carriageway, a budget hotel and some dodgy looking establishments. They mean…well they don’t know what they mean…they just know it has something to do with Tennessee.

And that is why the rise of the South in general and The Cadillac Three in particular is unstoppable.