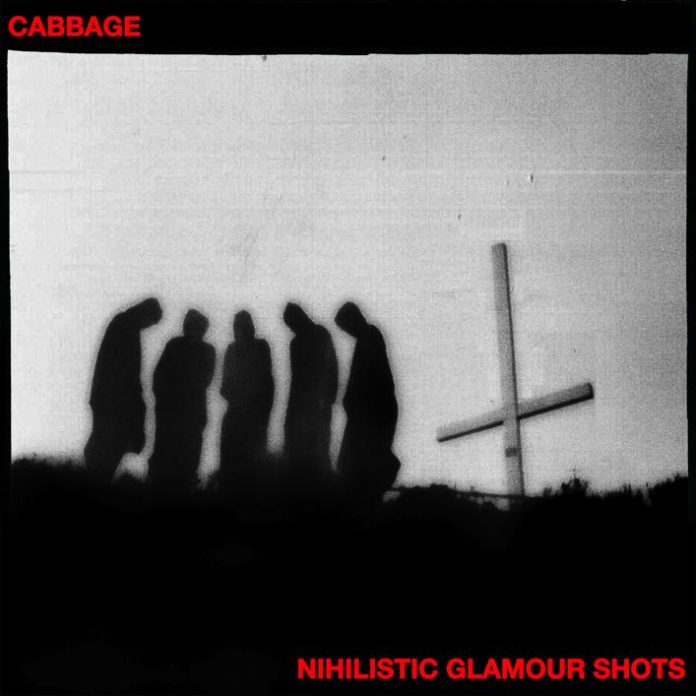 Nihilistic Glamour Shots’ is the debut album from Cabbage, to be released 30th March 2018 on Infectious Music. Listen to the new single ‘Arms Of Pleonexia’, premiered last night on Radio 1 by Huw Stephens.

Produced by James Skelly and Rich Turvey (Blossoms, The Coral, She Drew The Gun) at Parr Street Studios in Liverpool, ‘Nihilistic Glamour Shots’ is an album that confirms Cabbage as one of the most nuanced bands in years. Equally drawn to socialist politics and mucking about, they’re devotees of both big choruses and anarchic totems like GG Allin, Genesis P Orridge and Butthole Surfers. It’s a mixture writ large throughout ‘Nihilistic Glamour Shots’, from the frenetic opening salvo of ‘Preach To The Converted’, ‘Arms Of Pleonexia’ and ‘Molotov Alcopop’, via ‘Perdurabo’s swampy blues and wild funk of ‘Exhibit A’ to the devastating seven-minute finale ‘Subhuman 2.0’. It’s hard to think of another band who could write a magnificently infectious two-minute frantic anthem and then call it ‘Obligatory Castration’. Only two album tracks have been heard before, the BBC6 Music playlisted singles ‘Celebration Of A Disease’ and ‘Gibraltar Ape’. Indeed, the savagely brilliant ‘Postmodernist Caligula’ was written and recorded in a matter of days at the end of the album recording sessions.

There’s been a weight of fevered expectation around a full Cabbage album ever since their startling debut EP ‘Le Chou’ arrived at the start of 2016. Since then, the Manchester band have released 36 songs, played well over 200 gigs – and been at the centre of two media storms. Faced with a band as uncompromising as Cabbage, it’s disturbing if unsurprising that untruths have clouded the positivity of their intent. The reality is that Cabbage are a band to believe in, and ‘Nihilistic Glamour Shots’ is the most thrilling way imaginable to convey their message.

While it broadens Cabbage’s sound further still from their already eclectic previous five EPs, ‘Nihilistic Glamour Shots’ also does a superb job of capturing the raw energy of their freewheeling live shows. The band have kept the gigs fresh partly by theming each tour, with autumn’s Healing Brexit Towns Experiment living up to its name.

Cabbage formed in Mossley, a small town on the edge of the Pennines nine miles East of Manchester, in November 2015. Co-vocalist Lee Broadbent and Eoghan Clifford (guitar) had been drummers in their previous bands, while Joe Martin (co-vocalist) was a promising performance poet. Hilariously twisted live staple ‘Dinner Lady’ from ‘Le Chou’ was initially one of Joe’s poems. Bassist Steve Evans had the most experience, having been in several bands before adding his beatific calm and fluid playing to Cabbage. Drummer Asa Morley was the last to join, recruited in early 2016. While he’s so far the only non-songwriter in Cabbage, the laidback drummer isn’t to be under-estimated: check the power of his playing on the menacing ‘Reptiles State Funeral’.

Although they released a double-vinyl compilation of their first three EPs (the brilliantly titled ‘Young, Dumb And Full Of… Cabbage’) for Record Store Day 2017, ‘Nihilistic Glamour Shots’ is definitely Cabbage’s debut album proper. And, whatever else happens, ‘Nihilistic Glamour Shots’ will have people talking about Cabbage for the right reasons. It’s as idealistic as music gets.

Cabbage head out on tour later this month, supported by The Rhythm Method, and will embark on more dates in April following the release of the album with support from She Drew The Gun. On May 19th, the band will curate ‘Glamour At Thee Ritz’ at Manchester’s O2 Ritz. Starting at 5pm and headlined by Cabbage, the event across 2 rooms at The Ritz will feature PINS, The Blinders, Rhythm Method, Witch Fever, Lady Bird, Sports Team + more to be announced over the coming weeks.

Main support on all dates: The Rhythm Method

Main support on all April dates(except 21st): She Drew The Gun

Tickets for all gigs http://gigst.rs/CABBAGE