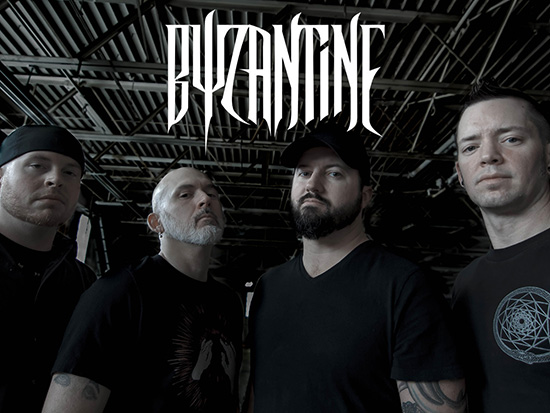 Ready to take on metal’s elite

West Virginian groove metal outfit BYZANTINE has signed a worldwide deal with Metal Blade Records! After releasing their music independently over the last three years, the quartet is ready to unleash their sixth, currently untitled album in early 2017 via their new label home.

Front-man, Chris “OJ” Ojeda had this to say about the band’s recent signing: “For the last few albums, we have operated outside the fringes of the music community by necessity. I had almost lost hope that we would ever have the chance to showcase our music to the world on a bigger stage. With the help of Brian Slagel and Metal Blade Records, we feel like Byzantine has been given a 2nd chance to make our 1st impression. We are absolutely thrilled at the opportunity to share our brand of heavy music with the world on the world’s best metal label!”

BYZANTINE was formed in 2000 by vocalist/guitarist Chris Ojeda and former guitarist Tony Rohrbough. After releasing three albums via Prosthetic Records, touring with Lamb of God, playing the main stage of New England Metal and Hardcore Festival, and receiving much praise from fans and media alike, the band abruptly called it quits in early 2008 – but it wasn’t long before the metal community demanded their return. In 2012, a reinvigorated BYZANTINE reunited with their seminal line-up, and consequently delivered two highly praised albums, which were crowd-funded through Kickstarter and Pledge Music and self-released. Now, after having been an independent artist since 2013, Ojeda and his crew are back with a new record deal, poised to dominate the scene once again.

In regards to BYZANTINE signing to Metal Blade Records, Jose Mangin (SiriusXM Liquid Metal)comments: “As the most massive supporter of Byzantine’s music since day one, we’ve known a secret that the rest of the world will NOW finally be able to realize, thanks to Metal Blade! The strength, raw talent, and absolute ease at which these West Virginians shred is a thing to experience, and it’s just a matter of time before they rise the ranks to become one of Metal’s elite!”