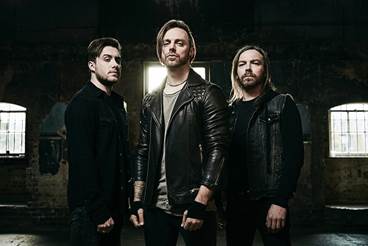 Following the monstrous success of their December 2016 UK tour, – which saw Bullet For My Valentine perform career-spanning setlists all over the UK, in addition to select performances of their classic 2005 debut album, ‘The Poison’, from beginning to end – BFMV will release a very special multi-format summation of their two consecutive sold-out performances at the world famous Brixton Academy, London.

Titled ‘Bullet For My Valentine – Live From Brixton: Chapter Two’ fans will now be able to experience the intensity of both ‘Night One’ (December 9th 2016’s, ‘career-spanning’ performance) and ‘Night Two’ (December 10th 2016’s ‘The Poison’ performance) via DVD, Blu-Ray, CD & Vinyl.

Full format details are below:-

‘Night Two’ CD (‘The Poison’ in its entirety setlist)

Matt Tuck says; “‘Live at Brixton Chapter 2’ marks the end of a massive 18 month global touring cycle, so to mark the success of ‘Venom’ and to celebrate our debut album ‘The Poison’ – we thought we’d capture both nights so that everyone could be a part of it. It was an incredible couple of nights at a venue that means so much to us, so make sure you grab a copy and enjoy the madness.”

Pre-orders for ‘Bullet For My Valentine – Live From Brixton: Chapter Two’ are now live via Pledgemusic.com:https://bulletformyvalentine.pmstores.co/

Meanwhile, BFMV are the only International act to be nomination for ‘Best Hard Rock Act’ at this year’s Alternative Press Music Awards, coming up against Korn, Halestorm and In This Moment.

Vote for Bullet For My Valentine HERE.

BFMV have started work on a new studio album, their first for Search and Destroy / Spinefarm Records, and will be appearing at the following shows this summer:-

Previous article
Syt Down
Next article
Mutating On The Road