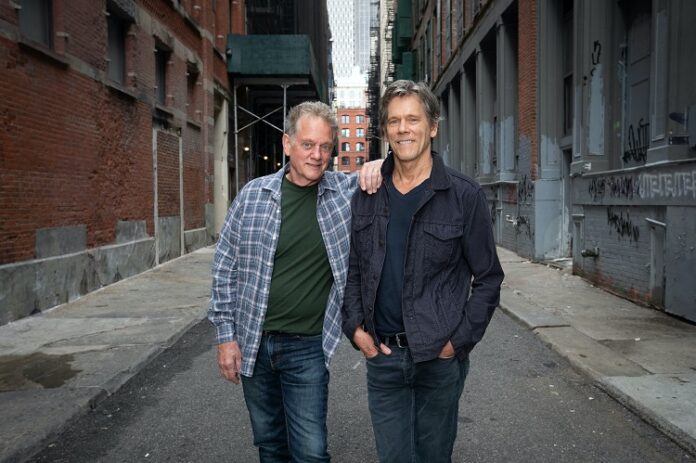 The Bacon Brothers are eager to announce the tour dates for their upcoming ‘Out of Memory Tour.’ The band will be embarking on an East Coast run commencing April 3rd in Ridgefield, CT. Tickets go on sale Friday 12/17 at 10am EST at baconbros.com. Kevin stated, “We’re excited to get back out and play live. We’ve pulled some new tunes together, and we like nothing better than sharing new music with people because you never know how they will react!” Michael Bacon opines, “It feels good to get back in the saddle, vocal exercising, building up callouses, and hanging with my brother and our amazing band.”

The pandemic was a fertile time creatively for the brothers. They released a new album, The Way We Love, out of which came an array of accompanying videos. In April 2020, they released the video for “She-Zee-Zee (Easy on My Eyes.”)AmericanSongwriter premiered the video for “The Way We Love” in May 2020. “Corona Tune” was premiered by PopMatters in July 2020. In September 2020, the video for “Bigger” was presented as a World Premiere by Ditty TV. And lastly, American Songwriter premiered the brother’s most recent video, “British Invasion,” in July 2021. While in the midst of producing music videos, Kevin & Michael have also spent the past year serving as judges in the American Songwriter Magazine 2021 Lyric Competition.

Fiercely devoted to making music, even from an early age (they cite such influences as the Rolling Stones, the Beatles, Motown, Led Zeppelin, Philly Soul, and James Taylor, with mentions from Michael of Pete Seeger, Jimmy Rogers, Chet Atkins, and the Jim Kweskin Jug Band, the two siblings share a singular body of work that’s found them spending more than 20 years of working the road and paying their dues, resulting in ten albums – Forosoco (1997), Getting There (1999), Can’t Complain (2001), Live: The No Food Jokes Tour (2003), White Knuckles (2005), New Year’s Day (2009), Philadelphia Road (2011) 36Cents (2014), the eponymous, The Bacon Brothers (2018,) and The Way We Love (2020.)

When not making music, Kevin Bacon is an award-winning actor with 80 films and dozens of television and stage credits to his name, resulting in numerous Emmy and Screen Actors Guild nominations cited in his resume. Kevin has recently been filming City on a Hill – Season 3 for Showtime. Emmy-winning composer, Michael Bacon, is back working again on ‘Finding Your Roots with Henry Louis Gates’ a program that has been a PBS staple for the past 15 years.