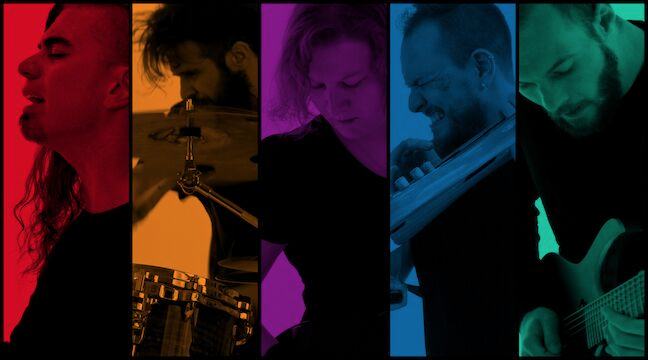 Australian pop sensibilities combined with modern progressive heaviness – the cult force that is VOYAGER are back with a new album, entitled ‘GHOST MILE’. They smashed their Pledge Music campaign target in just over a week, and 2 days after releasing their first single ‘Ascension’, taken from the album.

The band have now revealed the album artwork and tracklisting for ‘Ghost Mile’ which is set for a 12th May release.
The artwork was done by the band’s drummer Ashley Doodkorte.

VOYAGER’S sensationally anthemic 6th opus has an amalgamation of everything the band does best- huge soundscapes, pop and prog sensibilities with catchy and thought-inducing instrumentals. The album was mixed by Matthew Templeman and mastered by Simon Strutters and maintains the production that was such a successful selling point for their album ‘V’.

In June 2014, Voyager released their fifth opus; the internationally critically acclaimed ‘V’. Their new album received incredible reviews from media outlets such as Metal Hammer, Prog Magazine, Classic Rock Magazine and Revolver Magazine. In addition, ‘V’ entered the top 20 on the CMJ US Loud Rock Charts and led Voyager to receiving a nomination for the ‘Breakthrough Artist’ award at the 2014 Prog Magazine Music Awards and an invitation to appear at Bigsound 2014.

‘V’ also saw Voyager perform at major festivals such as ProgPower USA, Euroblast Festival in Germany and the prestigious ProgPower Europe Festival in The Netherlands. They also shared the stage with the likes of Deftones, Opeth, Leprous, Protest The Hero, Nightwish, Epica, Oceans of Slumber and Coheed and Cambria over the course of V’s album cycle.

Having ended 2016 with a bang touring Australia with DEFTONES and KARNIVOOL, receiving a WAM award for ‘Best Heavy Act’, and already being invited to once again play Euroblast and headline Progpower EU in 2017, it’s looking to be their biggest year yet with the upcoming release of ‘GHOST MILE’.