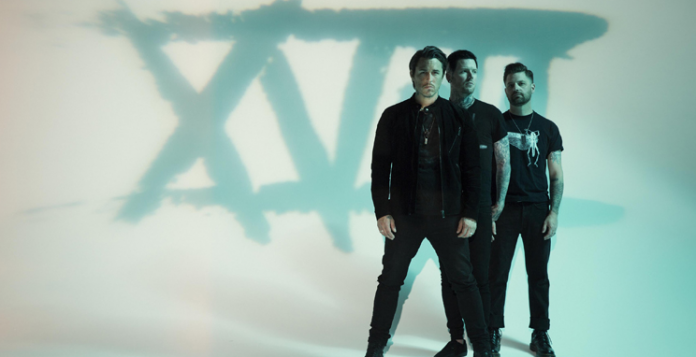 Eighteen Visions, the seminal metal band that recently announced they had reformed and signed with Rise Records have today announced that they will be doing a UK tour this November.

Their long-awaited new album, XVIII is out now.

Talking on announcing the bands first UK shows in 11 years singer James Hart says
“We’ve had some of our most memorable shows ever in the U.K. When we knew we were going to start playing again, getting back to the U.K. was an absolute must. Playing new songs in intimate rooms for our wild U.K. fans is something we’ve been looking forward to most upon returning!”

New album XVIII, the reunited and reenergised band’s first new album in over a decade, is both mission statement and battle cry. It’s a blistering, dense, and diverse album. Recharged and newly partnered with Rise Records, 18V sound liberated from the expectations of the outside world and driven only by their own personal and artistic directive. This is the album promised by the raw alchemy of every other Eighteen Visions record. The unrelenting force and unashamed ambition that fueled every stylistic incarnation of this always evolving and never boring band: it’s finally fully realized in the sound of XVIII. The album was made at home in Orange County, with U.K. transplant and multi-instrumentalist producer Mick Kenney at the helm. His close relationship with the guys in the band (vocalist James Hart, guitarist Keith Barney and drummer Trevor Friedrich) lent itself to the most fully realized recording in their discography, emphasizing every strength of 18V’s unique arsenal. Among the album’s many highlights is “Live Again,” a moving tribute to bassist Mick Morris, who passed in 2013, “Picture Perfect” a super heavy, dirgy assault on fakery and wolves in sheep’s clothing, dripping with menacing melody and “Fake Leather Jacket,” a molotov cocktail tossed at the music industry, threatening and staunchly confident.

The full track listening for XVIII  is:

1.Crucified
2.The Disease, The Decline, and Wasted Time
3.Underneath My Gun
4. Live Again
5.Laid To Waste in the Shit of Man
6.Oath
7. Spit
8. Picture Perfect
9.Fake Leather Jacket
10. For This I Sacrifice

Eighteen Visions (sometimes stylised as “18 Visions” and regularly name checked by diehard supporters around the world as simply “18V”) were declared part of “The Future of Metal” byRevolver Magazine during their meteoric rise from proto-deathcore indie band, nurtured by the DIY scene, to major label “next big thing” in active rock. A lengthy section of Louder Than Hell: The Definitive Oral History of Metal is dedicated to the passion fuelled Orange County heroes. Their fusion of hardcore punk energy and death metal fury; ’80s Sunset Strip attitude and ’70s sexualised charisma; and the dark romanticism of grungy ’90s alt-rock, became something definitively all of their own. They’ve toured with Lamb Of God, Killswitch Engage, Bullet For My Valentine, Coheed And Cambria, HIM, and fellow OC denizens, Avenged Sevenfold. Their live show is both slick and dangerous, impassioned and full of concentration. 18V is incongruously yet brilliantly suited for both the heyday of arena rock and gatherings in sweaty basements.

Kerrang! detailed their exploits, Metal Hammer heralded albums like Obsession and what was nearly their swan song, 2006’s Eighteen Visions, while fans celebrate 18V anthems like “Victim,” “Broken Hearted,” “Tonightless,” “Tower of Snakes,” “Motionless And White,” and “You Broke Like Glass” with monstrous singalongs around the world, whether at festivals like Download UK and Australia’s Soundwave or in intimate clubs. Having fully realised a sound embraced equally by acolytes of Stone Temple Pilots, Smashing Pumpkins, and Guns N’ Roses, with a flair for the dramatic akin to Marilyn Manson, and a larger-than-life pop gloss reminiscent of Def Leppard’s massive Hysteria, Eighteen Visions disappeared the aforementioned Chain Reaction show.

The impact the band maintains on the scene around them can’t be overstated. Even the notoriously snarky Metal Sucks confessed “every other band under the sun ripped them off” in a 2017 blog post. In 2011, the tastemaker blog ran an article called, “Stealing 18 Visions’ Ideas: A Book By The 2011 Metalcore Scene.” But these sentiments, while flattering, have never driven Eighteen Visions. In fact, their 2017 reformation is guided by the same principles that have always led them: to exorcise some demons, with brutal heaviness, unashamed melodies, always in service to their authentic, cathartic muse.