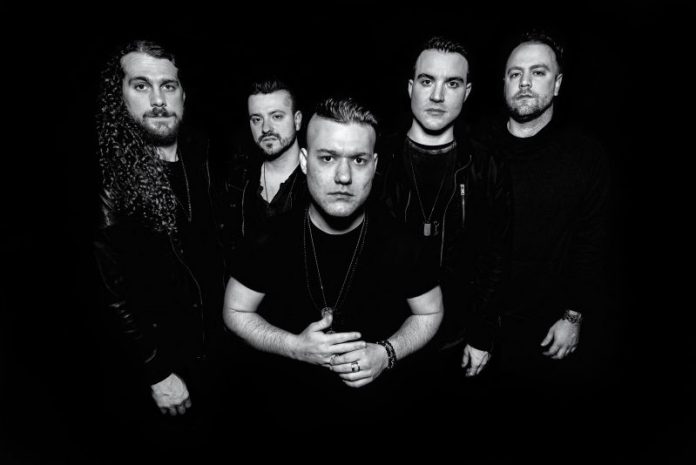 Based between Cleveland and Columbus, Ohio – Nine Shrines dig deep to explore the nuances of contemporary metal, navigating through Metalcore, Alt Rock and stadium sized choruses – Formed by former Attack Attack! Drummer Andrew Wetzel and Life On Repeat guitarist Andrew Baylis early in 2014, they are a band woven into the fabric of the explosive Ohio scene.

Between them in their previous bands they had toured the world over, had critical and commercial success (the last Attack Attack! album ‘This Means War’ went to #11 on the Billboard charts) experienced the highs that come with that but also the lows that cause bands to collapse. From out of the ashes of Attack Attack! Caleb Shomo formed Beartooth and Austin Carlile went on to form Of Mice and Men.

‘Parasite’ is based on personal experiences and is an ode to those who deliberately create problems, explains the bands vocalist Chris Parketney. “Parasite is about worthless people. The type that latch onto you and drain you of your money, your happiness, and your self worth.  Once they are gone, you are left empty. We all have dealt with these people in one way or another. This is our Fuck You to those people!”

All of it, the good the bad the ugly of their life to this point shaped the song-writing on ‘Misery’. Hitting the road as teenagers and not fully returning home for years, challenging themselves and gaining perspective through trial by fire gave lots of similar ideas and experiences of how much work it takes, how hard it is and how much perseverance is required and because of that it’s a record that drips with emotion and defiance.  “When we first started writing we didn’t really have any idea what we wanted to do, we just would write anything. The first songs were all over the place searching for the sound we were looking for” he recalls.

When it came to titling the record, ‘Misery’ fit perfectly – it summarises all the different themes that play into the struggle of putting your heart and soul into something and the world that builds around and within that.  Self-produced, it’s the sound of a band refreshed, reignited and harnessing the rawness into intricate and cathartic snapshots, the album artwork ties into the heart of the album depicting someone having their soul sucked out of them. “That’s really how it feels sometimes when things start going the wrong way” adds Wetzel.

With only a handful of shows under their belt but two of those being with Halestorm and the torrential downpour flooding baptism with Volbeat they are already coming out the traps full force. Already with a collective lifetime of ammunition and experience ‘Misery’ is only the start.