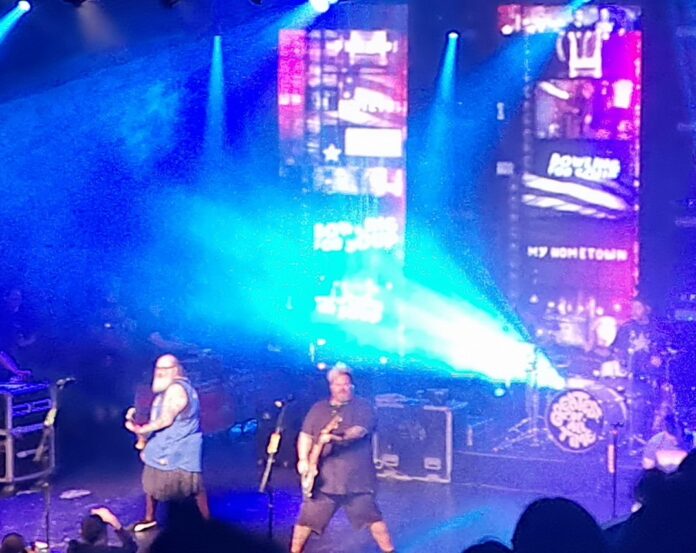 It’s less of a gig than a pop punk party, it seems, as Birmingham comes out in its thousands for Bowling For Soup. The shows, so far, have mostly been in seaside towns in small venues. Here though, the band are bringing a full production.

Lets not kid ourselves, either, Birmingham is ready. There’s a big show feel even before Californian husband and wife duo, The Dollyrots do that thing that Pink suggested we did in one of her songs. Kelly Ogden and Luis Cabezas have been doing this for two decades now, and they are as sweet as The Candyfloss in last night’s venue of Scarborough. There’s something so simplistic about “Twist Me To The Left” and “Too Much Fun For My Health” that you can’t resist it, even if you tried. “I Know How To Party” might as well be their anthem, and even if you weren’t expecting “Brand New Key” (which I thought was a Wurzels song, but whatever) then you got it anyway (“they sang along in Grimsby” explains a put out Kelly, although it is about the only time she stops smiling throughout) and “Because I’m Awesome” seems to amplify the feeling of positivity that has underwritten the set. 20 years of trying to make people feel good. That’s quite a legacy if you think about it.

Right at the end of their set (and let’s face it, where else were they going to do it?!) Lit play “My Own Worst Enemy”. And its as if the last 23 years haven’t happened. Goodness me, how we loved their “A Place In The Sun” record. We went to watch them at festivals, then, we went to watch them at headline shows and they were brilliant A. Jay Popoff was the epitome of cool, and they had the tunes. They must know it too, because almost half the set is from that era. “Four” and “Zip Lock” have stood the test of time remarkably well, actually, as have the band. Older – definitely  – wiser? Maybe, and with six records (and a seventh on the way) they know how to work a crowd in the manner of all experienced bands. “Miserable” is still utterly ludicrous, and the new material they play – in particular the new single “Kicked Off A Plane” is impressive. Sandwiched as it is in between “…Enemy” and the other big hit “Over My Head, it isn’t out of place. Far too infrequent visitors to these shores over the years, it might have been easy to lose touch with Lit. Consider this your reacquaintance with some old friends.

In between bands DJ Matt Stocks (who was born right here in the second city) is whipping the crowd up. When Lit exit he drops a trio that might be described as “Andy’s Playlist”. “Summer Of ’69”, “Jump” and “Livin On A Prayer”. Then after a few that I am less familiar with, he whips out “Torn” by Natalie Imbruglia. And 3000 people in the Academy all remember at exactly the same time what a great song that is. 3002, actually, given that Bowling For Soup emerge with a “version” of it.

Now here’s the thing about BFS. They’ve been doing this for 28 years and they aren’t changing. As Jaret Reddick observes before they play “High School Never Ends”: “I always used to say I’d never be 50 singing about High School”, but we are where we are.

So Reddick and guitarist Chris Burney – the Beavis And Butthead of BFS if you will – pilot this 75 minutes through the “Comedy Jam”, the “official band photograph”, some good natured jokes about a fan they spot with one arm, and stopping the set to give a plectrum to a little girl who has to leave as its late.

All those ephemerals are as much part of the band as the songs, but my goodness, when they play those songs they are as switched on and focussed as any band out there. Thirty years at the top affords them plenty of choice too and this set is packed with brilliance. “My Hometown”, “Ohio (Come Back To Texas)” “The Bitch Song” (“thanks to you guys for giving us a career!” offers Reddick before that one) prove that.

They’ve also got a new song to play. “I Wabt To Be Brad Pitt” is as good as any too, but in typical style they ham it up: “boo as much as you want, I already got your money,” says the singer, who brilliantly later claims that he’s a “high price ho these days as I charge by the pound”.

They’ve got the big hits to play too, of course. “Punk Rock 101” and “Girl All The Bad Guys Want” (“the greatest song ever!” is the shout from the stage) which ends the set are greeted like family, and when they return for the encore it’s got “1985” to end (and I didn’t know that was a cover until yesterday!) but not before they’ve played “Emily” to celebrate a marriage proposal that has gone on earlier in the night.

That struck me for two reasons. 1) there’s a connection between band and crowd that they’d even mention it, and 2) it shows how much Bowling For Soup mean to their fans.

After all, that’s how you pack venues for three decades. You need to be good and you need to have songs that connect. Bowling For Soup are the former and have plenty of the latter. They just present it in an unique way, so much so that you don’t even realise how good they are at first. But strip away the layers and you are left with some superb songs.